[media]The Museum of Sydney on the site of Sydney's first Government House is a place of national significance, recorded on both state and national heritage lists. 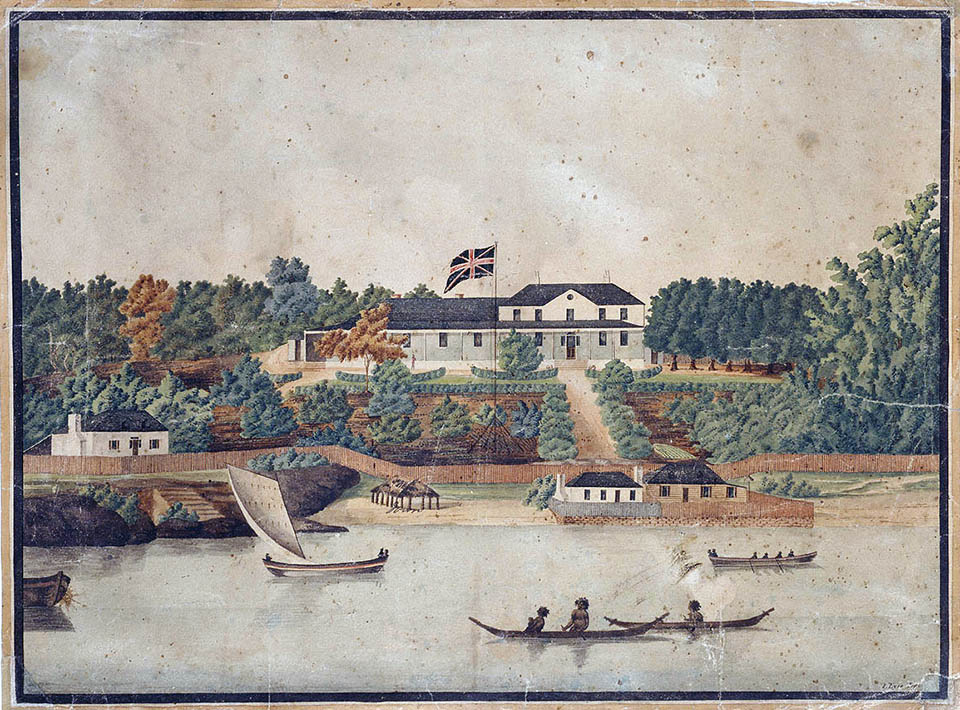 The vacant site of the first Government House, bounded by Bridge, Bent, Phillip and Young streets, was briefly considered as a site for Sydney Town Hall in the early 1850s. The Council of the Municipality of Sydney, formed in 1842, was granted this city block in 1851. Although James Barnet drew up plans in 1854 for a Town Hall on the site, the council stalled, preferring a location closer to the business district of George Street. The old burial ground on George Street was selected as the Town Hall site in 1868, and building commenced the following year.

[media]The city block that had been the first Government House site was left vacant until the early 1860s, when it was subdivided and sold. Two rows of terraces on Phillip and Young streets, to the south of the first Government House site, were built between 1867 and 1874. They were used as accommodation and offices for businessmen, and later by a range of government departments. Bernard McGlade operated a carter's yard on the open site of the former Government House, between the Young and Phillip Street terraces and facing Bridge Street, from the 1860s until the turn of the century. During the time of McGlade's occupation, the yard was obscured by a wall of advertising hoardings that ran around the corner of Bridge and Phillip streets. 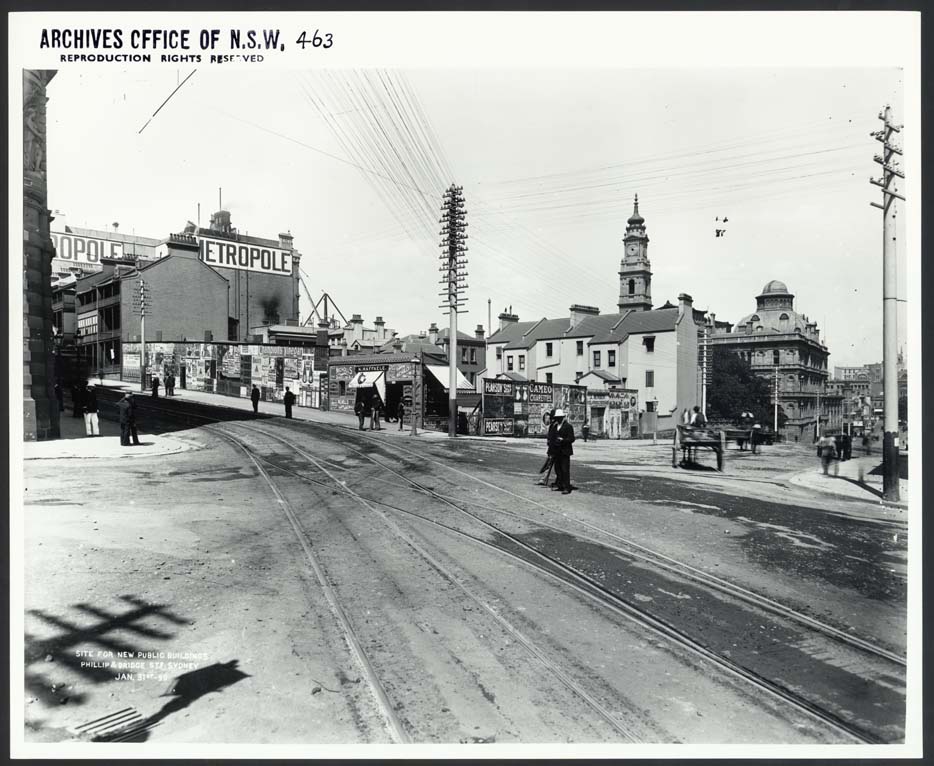 [media]In 1912, a temporary structure known as the 'Tin Shed' was built on the site, designed and later occupied by the Government Architect's Department. The site was levelled in 1968 and was used as a car park until the early 1980s. The State Government announced plans to develop the site in 1982, calling for tenders for a commercial tower block. 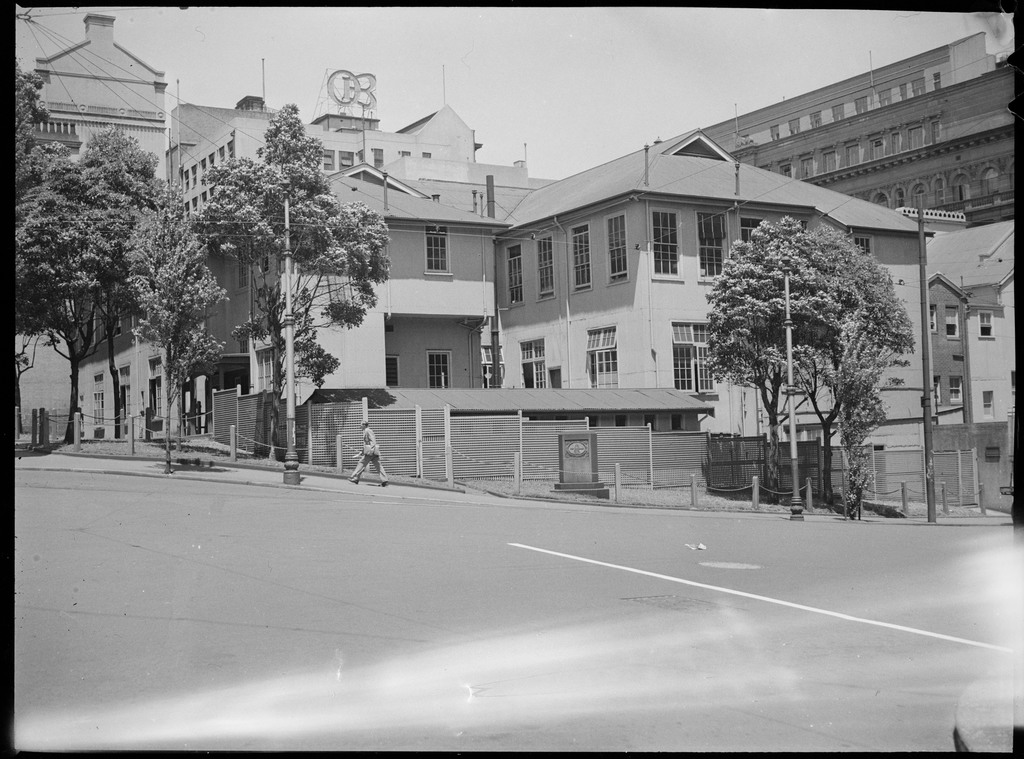 Archaeological excavation of the site began in 1983 and provoked considerable public interest and concern. In 1988, the State Government announced an international architectural design competition for the site, which would ensure the conservation and commemoration of the first Government House foundations dating from 1788–1845. The brief included specifications for a facility for the commemoration and interpretation of the site of the first Government House. The architectural firm of Denton Corker and Marshall was selected in 1989, and construction was undertaken of the award-winning Governor Phillip and Macquarie towers and the smaller commemorative facility, between 1990 and 1994.

[media]In 1988, the Historic Houses Trust was selected to manage the museum on the site of First Government House, and all the records associated with the excavation of the site. 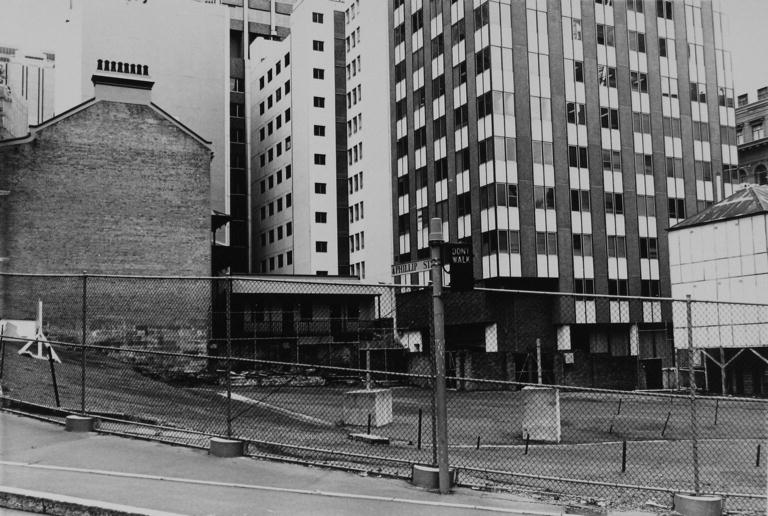 After years of planning, the Museum of Sydney on the site of first Government House was opened in 1995. Beneath the museum forecourt, known as First Government House Place, the remaining foundations and drains of the house, found by archaeologists in the 1980s, are preserved along with many fragments and artefacts. The skeleton of a dog remains a mystery – was it a feral dog, or a pet, carefully buried by its owner?

Above ground the sculptural installation Edge of the Trees by Janet Laurence and Fiona Foley marks the site of first contact between the British colonisers and the Gadigal people, and includes Aboriginal voices, artefacts and ochre. Exhibits at the Museum of Sydney reveal the traditional lifestyles of Sydney’s first peoples and the impacts colonisation had on Aboriginal clans, whose ancestors lived in and around Sydney Cove, Warrane, for thousands of years before the First Fleet entered Port Jackson.

Sydney is now a sprawling, global city, home to almost 5 million people from all over the world. The Museum of Sydney tells the story of the city’s development – from plague outbreaks in the Rocks to ‘making do’ in the Great Depression, from Sydney’s early architecture to the greening of our city today, from the lights of Kings Cross to new developments on the city fringe. Exhibitions showcase images of Sydney then and now, depicting important sites, places and people in Sydney’s history and contemporary life.