Some of Sydney's historical streets and laneways are still with us. Amid the towering skyscrapers of today, there remains a little lane called Rowe Street. Half a century ago it was a small haven of sophistication in a city that was preparing to rip down its heritage to make way for the concrete and glass monstrosities of the Askin era.

In the 1950s and 1960s, Rowe Street was the place to go for Sydney's 'touch of Paris'. A narrow laneway, running between Pitt and Castlereagh streets, it was small-scale, personable, cosmopolitan, and fun. Its speciality shops offered a mix of fashion, tearooms, homewares, art, music, literature and good coffee.

Art was always part of Rowe Street. At the start of the twentieth century it had garret studios for artists such as Antonio Datillo-Rubbo and Lionel Lindsay. By mid-century, Russell Drysdale, Sidney Nolan, Bill Dobell and James Gleeson gathered at Carl Plate's Notanda Gallery to cast their eyes over prints, postcards and books from the overseas art world.

There were several bookshops, such as the Roycroft Bookshop and Lending Library which was run by the 'incredibly vibrant' Frances Zabel. There was also a discreet downstairs shop where one could buy 'semi-erotic' banned literature, ranging from Plato's Phaedrus to DH Lawrence's Lady Chatterley's Lover to Gillian Freeman's The Leather Boys.

Apart from its representatives from the art and literary worlds, Rowe Street abounded in 'personalities' who ran their own establishments. Poet Kenneth Slessor's sister Maude ran the Jade Tree Gift Shop and the milliner Henriette Lamotte sold her elegant chapeaux [media]at number 27. Interior designers Marion Hall Best and Margaret Jaye each had their own showrooms, while Dorothy Inglis's dress shop Fifi drew on the latest Paris fashions. Steven Kalmar brought a touch of the latest international contemporary design. It was a cosmopolitan world in such a little street. 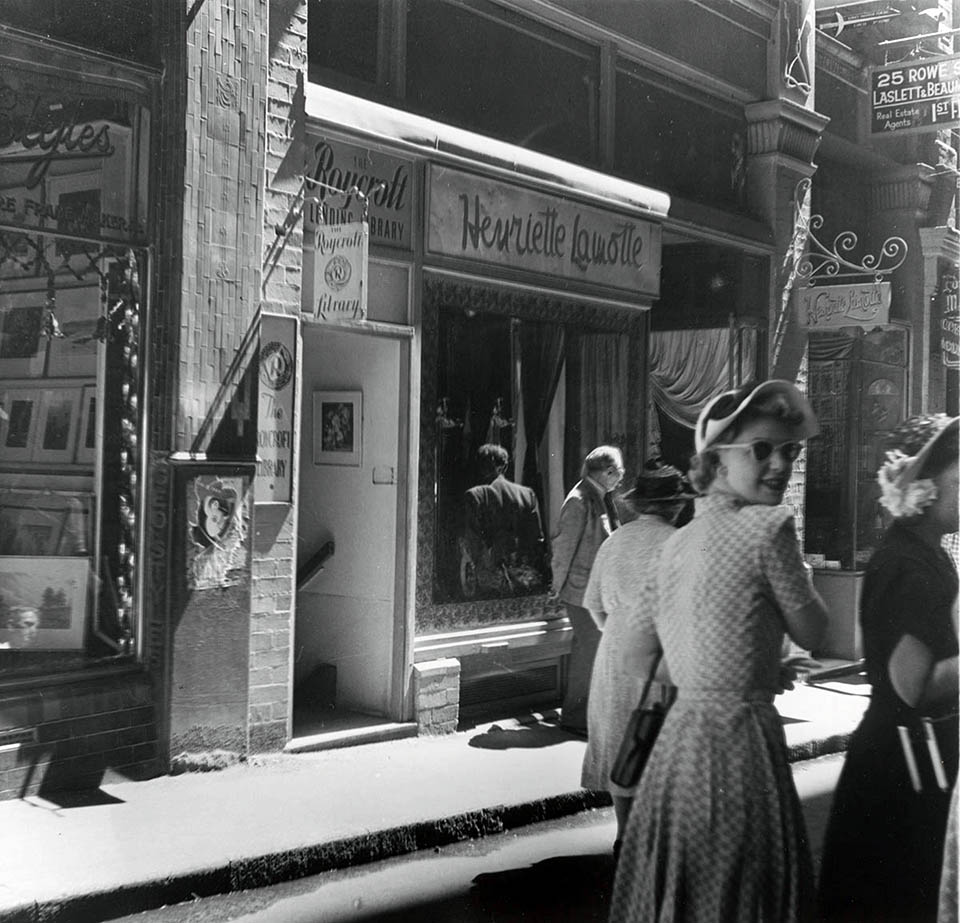 There were ballet and tap-dancing schools, a smart button and jewellery shop, several importers, and Rowe Street Records, the much-loved haunt of the music crowd. There were also several coffee shops, including Mervyn Horton's Galleria Espresso which opened in 1956. Horton was an art writer and entrepreneur. In 1963 he founded the journal Art and Australia, which he edited for 20 years.

But the world moved on, and commercial imperatives saw nearby blocks sold and consolidated for the MLC Centre. By 1973, the old Rowe Street was gone forever.