Lucien Henry, who [media]arrived in Sydney in 1879 from political exile in New Caledonia, was an artist who, during his relatively short stay, pioneered the use of Australian motifs as a national style in decorative art. Henry worked in a wide range of media from painting, sculpture and architecture to stained glass and other decorative arts. He was particularly interested in the decorative form of the waratah, which he integrated into a number of his works. As a teacher and art instructor at the Working Men's College, and later the Sydney Technical College, he influenced a rising generation of Australian artists and, importantly, art teachers. 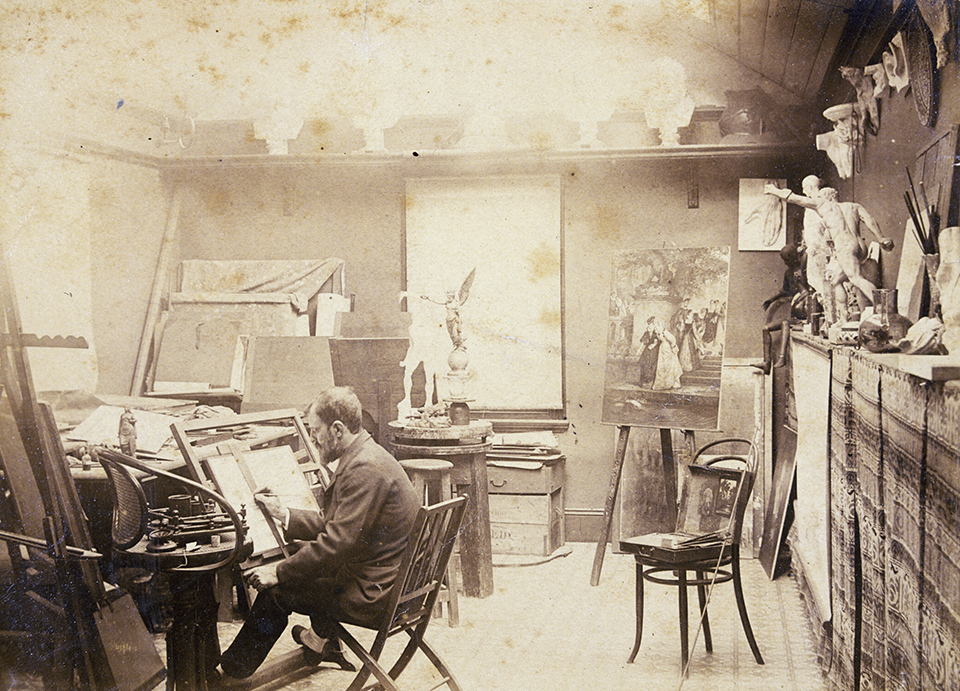 Lucien Henry was born in Sisteron, Provence, France in 1850, moving to Paris in 1867, where he studied under acclaimed architectural master, Eugene-Emmanuel Viollet-le-Duc and later at the Ecole des Beaux Arts. In 1871, Henry was an active participant in the Paris Commune, being a Chef de la Legion responsible for the defence of the 14th arrondissement. With the defeat of the Commune, Henry was arrested and sentenced to death, but was instead exiled to the French prison colony in New Caledonia. [1]

Henry remained in New Caledonia until 1879 when ex-Communards received an amnesty and were allowed to return to France. Henry instead chose to head to Sydney, maybe trying to escape his revolutionary past, seeking new opportunities or following his heart. He arrived in Sydney in June 1879 and married fellow exile, Madame Juliette Rastoul (née Lebeau) the following year. In New Caledonia, Mme Rastoul had been the de facto wife of French exile Dr Paul Rastoul and was expelled by French authorities from New Caledonia, as a punishment for Dr Rastoul writing letters from the island. Madame Rastoul arrived in Sydney with her children in 1874, where she quickly established herself as a French teacher. [2] Dr Rastoul drowned trying to escape in 1875. With her contacts and high profile, she was able to help Henry establish himself as an artist upon his arrival.

By September 1879, three months after his arrival, Henry was advertising as an art tutor in local papers, noting his training at the School of Fine Arts, Paris, and that he taught drawing, painting and sculpture. By October, it was reported that he had sculpted in plaster a medallion representing Australia, modelled from the French republican head of Marianne (he later cast this in bronze and entered it in the Sydney International Exhibition that opened later that year), and had been commissioned to complete two paintings of New Caledonia for a private owner. [3] His reputation as a skilled artist was further enhanced by his completion of a bust of Judge William Charles Windeyer.

Henry had arrived in Sydney just as the city began to embrace its artistic potential and as the colony was preparing for its centenary in 1888. The Sydney International Exhibition, which opened in 1879, was the first of its kind in the southern hemisphere. As one of a small group of qualified and recognised artists in the city, Henry was appointed as a judge for engraving, lithography, photography and architectural design. [4] In June 1880 he was invited by George and Arthur Collingridge to join 88 other artists in the establishment of the Art Society of New South Wales, a society that the Collingridge brothers saw as the foundation for the development of an Australian school of painting. Henry was represented in their first exhibition by two paintings, six etchings and five sculptures.

In addition to his exhibiting, Henry was a private tutor from his house in Victoria Street, Darlinghurst, and also presented at least one public lecture at the Technical or Working Men's College run at that time by the Sydney Mechanics School of Arts, lecturing on 'Art and Design' in July 1880. [5]

In 1881, Henry took up a position as modelling teacher at the Technical College, instructing in model making, with the class quickly increasing from nine to 50 students. [6] In December 1882, a number of these students exhibited in the first public exhibition of works from the class. The success of his class was displayed in the establishment of a new course to offer drawing classes with particular attention to native Australian fauna and flora, a subject Henry became increasingly passionate about during his time in Australia. Henry's students exhibited again at the 50th Anniversary of the School of Arts in March 1883, where their work was described as 'perhaps the most interesting in the whole exhibition'. [7]

With a growing reputation as an artist and art teacher, in May 1883 Henry made a submission to the newly-appointed Board of Technical Education. Henry's teaching had brought him to the opinion that a lack of education in art history and style was a problem among art students in Sydney and New South Wales, and further that the state had an obligation to provide a technical art education that would benefit the community as a whole rather than being merely 'a pleasant pastime in the production of pictures'. [8] Henry considered the development of skilled trades and artists as linked to a national destiny, and thought they should be able to compete commercially, and secure permanent employment through their skills. To achieve this, artists and artisans needed to learn the principles of geometry and perspective, which in turn would serve as a basis of knowledge for many related and seemingly unrelated skills, such as those needed by miners, geologists, agriculturalists, surveyors, engineers or any technically based professions.

Henry's arguments fitted nicely with the newly formed Board's own ideas about education, and he was appointed as the first Instructor in the Department of Art at Sydney Technical College in 1884. To assist in his teaching, Henry ordered a stock of casts of classical statuary to help his students develop the basic techniques while also exposing them to the famous works of European masters. Further to this, as there was no tradition of masters' studios or workshops in colonial New South Wales, Henry saw the need for state intervention as imperative to allow the development of the students, give them a thorough acquaintance with the various styles and, importantly, to allow for the growth of an Australian style. [9]

Henry's working life in Sydney coincided with a growing sense of national pride coupled with an increasing urgency for a national style, as the colony approached its centenary event. Artists such as Julian Ashton were urging fellow artists to paint contemporary Australian scenes to illustrate the Australia around them, while the Bulletin was also in favour of an emerging Australian identity in the arts.

Henry saw the forms of Australian flora and fauna as ideal representations of the nation, and his work through the middle and late 1880s reflected this. Henry was particularly entranced by the waratah which he championed in a number of his own designs and templates for use in architectural and artistic works. [media]Such was Henry's influence in the use of the native flora and fauna that in 1915, Richard Baker, Curator and Economic Botanist at the Technology Museum (now Powerhouse Museum) wrote 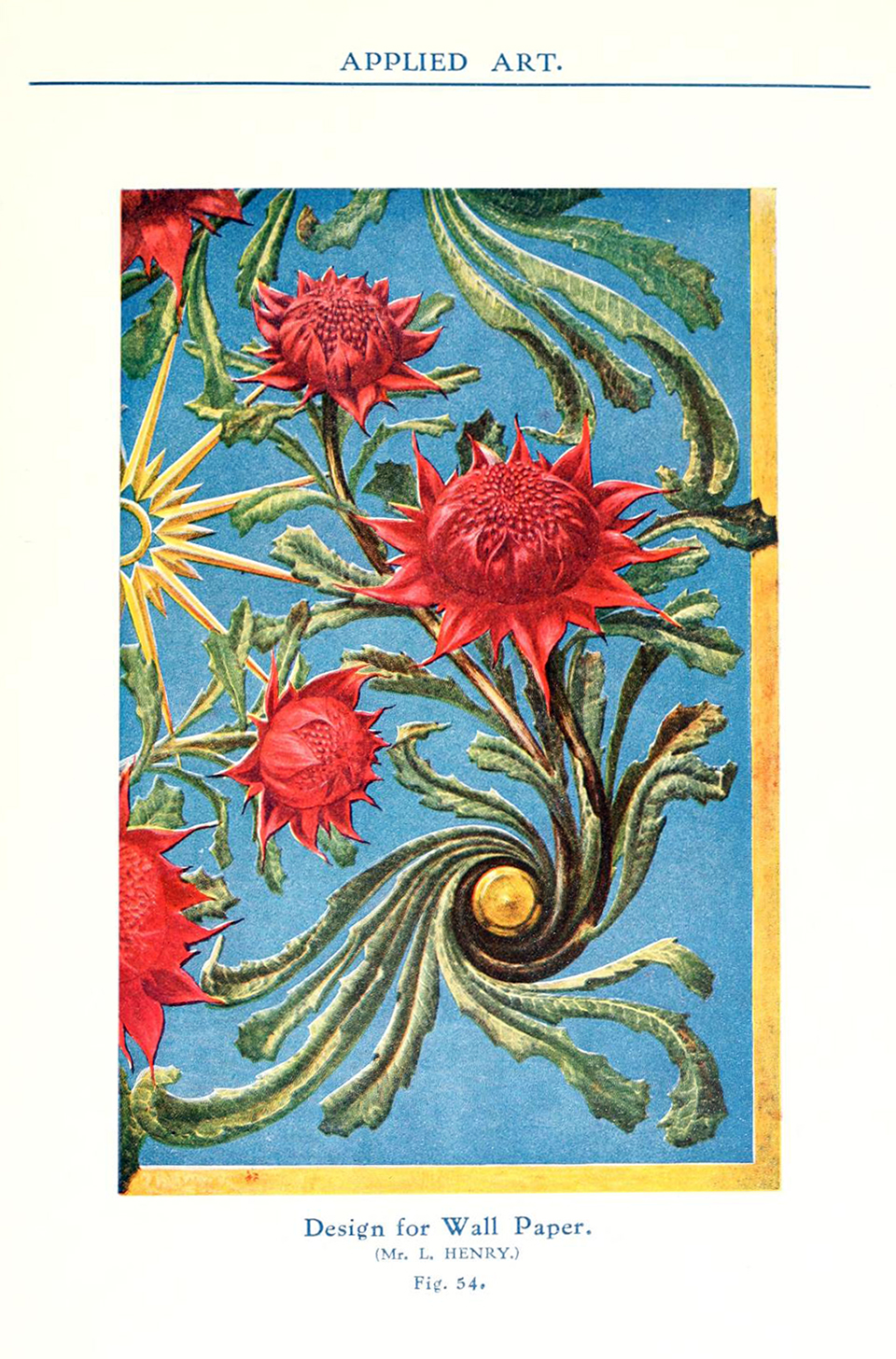 It is impossible to say now, or to give the name of individuals who idealised or conventionalised the Lotus, Acanthus, Honeysuckle or Iris, but in this young country of a little over a century's growth, a few of the artists' names may be mentioned who have introduced our native flora in decorative arts…Mr Lucien Henry, the first teacher in Art was par excellence a designer from nature…In Mr L Henry, Australia certainly had an artist possessing real genius, and his originality in design and other fields of fine and Applied Art will live long in the annals of New South Wales technical education. (His works) are a splendid proof of the fertility of his brain, for they cover original designs from our native fauna and flora in architecture, ironwork, wall-papers, glass, stained windows, jewellery, china, chandeliers, electric lights, tiles, horology &c. [10]

Henry's contribution to the development of an Australian style was most dramatically shown in the designs for his proposed book Australian Decorative Arts . Produced between 1889 and 1891, Henry's book was made up of 50 large format plates and 50 illustrations which he conceived as the foundation of a National School, and dedicated to the youth of Australasia. [11] Henry's book recast many classical architectural forms, such as a Corinthian column capital into a lyrebird capital, and placed native plants and animals into traditional formats such as cabbage palm rosettes, waratah panels or kookaburra lamp stands.

Henry also [media]produced a series of allegorical representations for medallions, reliefs and portrait busts. In his architectural work, he created two stained glass windows to grace the stairwells that flank the main hall in Sydney Town Hall in 1889. The north window shows a relatively traditional Captain Cook on board ship with telescope in hand. In the southern stairwell however, New South Wales is represented allegorically, draped in a Union Jack with a solar halo and headdress of rams' horns and wool. She holds a miner's lamp in one hand, representing the mineral wealth of the colony, and Neptune's trident, representing its maritime power, in her other hand. The side panels are decorated with waratahs, the stars of the Southern Cross, flannel flowers and firewheels. As well as the windows, the designs for the light fittings in the stairwells and the Main Gallery, which feature downswept waratahs, and the clerestory windows in the Main Hall are attributed to Henry. [12]

In May 1891 Henry left Sydney, returning to Europe to arrange for the publication in Paris and London of his book on Australian decorative arts. The newspapers reported that a dinner was held by his Sydney friends in recognition of his work as an instructor at the Technical College and of his contribution to Australian art. His departure was hoped to be temporary but was in fact permanent.

[media]Arriving in Paris he published War-Atah: Australian Legend in 1891. His main project however, the publication of Australian Decorative Arts, was not to be. The book had been intended by Henry to be the foundation of a national school of decorative arts in Australia. The proposal and the preliminary designs had been extremely well received, with the New South Wales government ordering 200 copies to be distributed to schools and colleges as teaching aids. The cost of publishing such a large illustrated work was prohibitive however, and the book remained unpublished. [13] At the same time, in Sydney, bankruptcy proceedings were taken against him by his stepson under the direction of his wife, who also started divorce proceedings. 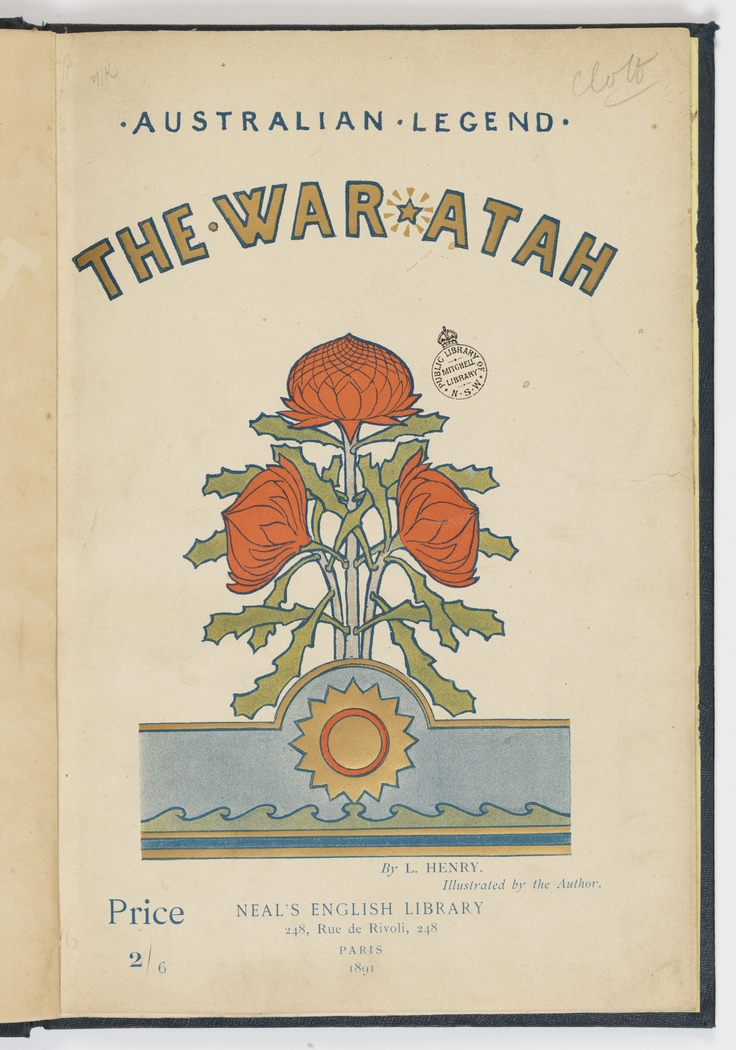 Lucien Henry died of tuberculosis in Paris in March 1896, almost five years after he left Sydney. His obituary in the Sydney Morning Herald recorded him as a sculptor, modeller and painter and the first to adopt the Australian waratah and stenocarpus as a motif of adornment. He taught a number of artists who went on to be well recognised in Sydney and Australia, including William Priestly MacIntosh whose figures grace many of Sydney's public buildings, including the Lands Department, Queen Victoria Building, Commonwealth Bank in Martin Place, and the Technical College in Ultimo, where in reference to Henry's influence, he used native flora and fauna to decorate the façade.