The current suburb of Lewisham is nestled between Petersham, Dulwich Hill and Summer Hill. The traditional owners of the land were the Cadigal people of the Eora nation. Lewisham has witnessed convict riots, a disastrous plane crash, extraordinary feats of railway engineering and a bold plan to keep hotels out of the suburb.

After European settlement several land grants were given in the area. The largest, of 100 acres (40 hectares), was made in 1793 to John White, surgeon-general of the First Fleet. In 1810 a grant of 40 acres (16 hectares) was made to George Gambling, an emancipated convict. Gambling built a farmhouse on the bank of a small creek, which became known as Gambling Creek. These grants and several others later formed part of the Lewisham estate of Jacob Josephson, which was sold in the 1850s by his son.

Development was slow after the sale of the Lewisham estate. The area was still heavily timbered and only accessible from Parramatta and New Canterbury roads. An advertisement in The Empire newspaper dated 29 October 1856 for the picturesque Virginia Waters estate, part of the Lewisham estate, speaks highly of its

ample space for gardens, orchards, and vineyards, an advantage specially to be prized by those who seek to avoid the high rents of the City and whereby being able to produce milk, vegetables, and fruit. They add materially to the comforts of life and at the same time reduce costs.

The waters of the estate were those of Long Cove and Gambling creeks. Substantial development of the Virginia Waters estate did not occur for a further 20 years.

Roads and bridges feature prominently in Lewisham's history. The eloquently named Battle Bridge spans Long Cove Creek (now Hawthorne Canal) at Parramatta Road. The original bridge was built by convicts and consisted of massive tree trunks laid across a swamp. It was constructed between 1805 and 1806 as part of a government program to make Parramatta Road serviceable.

There are two stories about how the bridge got its name. One suggests that during the bridge's construction the convicts rioted and were supported by soldiers under the command of Lieutenant Colonel George Johnston, who successfully put down the mutiny. Johnston had a record of involvement in mutinies. Another story suggests that the scrub around Long Cove Creek served as a meeting place for bare knuckle fighters. The sandstone arch of the bridge, built in 1873, survives despite later additions. Motorists now engage in the daily battle of the car on the site of Battle Bridge.

Lewisham [media]was an important location in the history of the Sydney to Parramatta railway, the first suburban line in New South Wales. On 28 May 1855 before the official opening of the line, the first passenger trip was made by the governor-general, Sir William Denison, to inspect the Lewisham viaduct. Two months previously, Captain John McLerie, superintendent of police, had laid the last keystone with full masonic formalities in the central arch of the eight-arch viaduct. 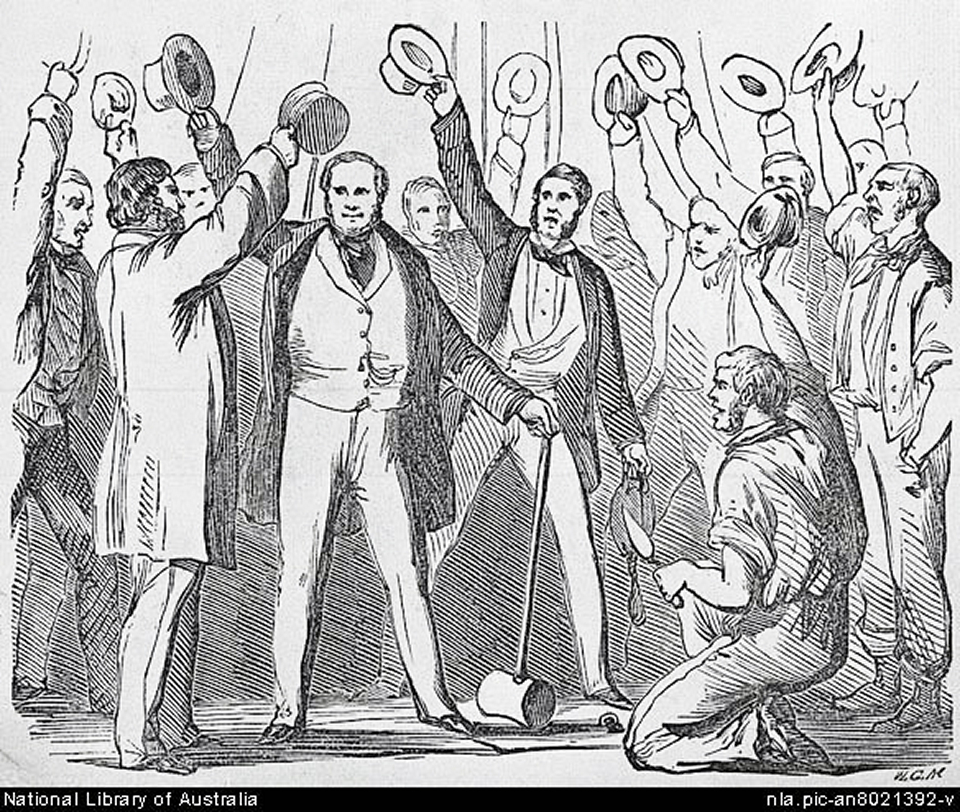 The [media]work on the viaduct had proved a difficult but successful engineering achievement. The viaduct itself was 18.3 metres high and was a landmark until its replacement 30 years later after it proved inadequate for the high volume of rail traffic on the line. It was replaced in 1885 by a unique Whipple truss structure. 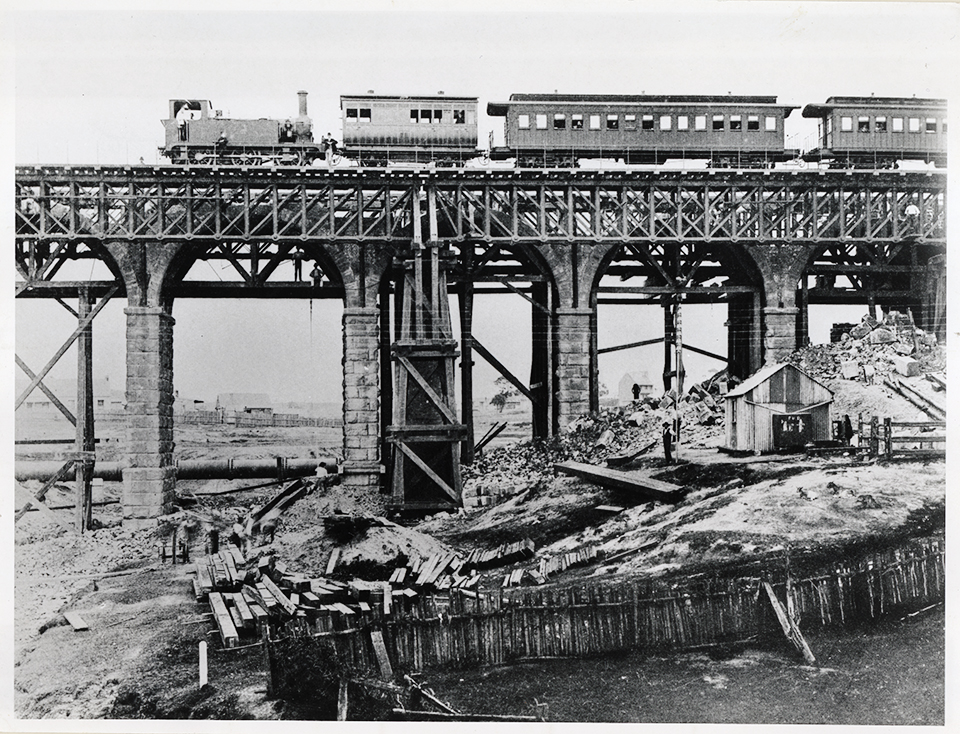 The Whipple truss technique of iron bridge building was pioneered in the United States in 1852. In the 1880s considerable controversy was sparked in Australia between those who favoured the newer North American technology and those who believed in proven British methods. The Lewisham Whipple truss bridge was added to over the decades. It was eventually replaced in 1993 because of metal fatigue. The bridge's pin-jointed construction made repair and replacement virtually impossible. Two of its six trusses remain on display at the site.

Lewisham railway station opened in 1886. It has always been a puzzle why it was built less than 800 metres from Petersham station, one of the shortest distances between stations in the Sydney metropolitan area. The nearby cemetery and the plan to build Lewisham Hospital may have had some bearing on the decision.

Petersham cemetery was established on 15 acres (six hectares) of land surrounding St Thomas's Catholic church, which was built in 1860. St Thomas's was the only Catholic church between Sydney and Concord. The first burial at the cemetery occurred in 1863, however no burials took place after 1884 except in established vaults. Most of the people buried there were of Irish descent. The most famous person buried there was Archbishop John Bede Polding, first Catholic Archbishop of Sydney. In 1901 his remains were relocated to the crypt of St Mary's Cathedral.

Part of the cemetery was resumed for railway extensions in 1923 and most of the memorials, except for the graves of several priests and the Polding memorial, were removed to Rookwood Cemetery. The cemetery was eventually covered by hospital and church buildings.

Lewisham Hospital, built around the cemetery, was opened by Cardinal Patrick Moran on 9 June 1889 and was run by the Little Company of Mary, whose convent adjoined the grounds of St Thomas's. The hospital closed in 1988 when it was purchased by the St Vincent de Paul Society. It was later redeveloped as a low-care hostel, high-care nursing home and self-care village.

A terrible tragedy at Lewisham Hospital unfolded on the morning of 1 February 1946, when a Royal Navy Firefly crashed into the hospital's boiler house after the rudder control mechanism failed. The pilot managed to parachute to safety but his observer came down with the plane. Two of the hospital kitchen staff were killed on the ground.

One of Lewisham's early identities was George Crothers, an alderman of Petersham Municipal Council from 1887 to 1895. Crothers, a wealthy builder, was a staunch Methodist and temperance advocate. He campaigned vigorously to keep hotels out of his swiftly developing suburb. As corner blocks near railway stations were a favoured site for hoteliers, Crothers reputedly bought every vacant one between Lewisham station and New Canterbury Road. The only hotel in the suburb is the Lewisham Hotel on Parramatta Road. Crothers was several decades too late to stop its construction. The first hotel, originally called The Wheelwrights Arms, was built there in 1857 to capitalise on the passing trade along Parramatta Road. There were also a number of livery stables nearby to repair horse-drawn vehicles, which were often damaged on the rough road. The pub catered for the workers at these establishments, hence its name. The hotel has been rebuilt and remodelled several times.

Crothers lived in Toothill Street, Lewisham. In the 1830s deer hunting parties would stop here and the riders would toot their hunting horns as they made their way down to Cooks River, a practice which led to the naming of the street.

In 1997 Lewisham Public School launched the 'Lewisham Meeting Place on Cadigal Land', which allows public access to part of the grounds outside school hours, a local step in the national movement of reconciliation.