There was nothing ordinary about Maria Lock. She was the daughter of an Aboriginal chief, her educational achievements were advanced and her marriage to a British convict was unusual. Indeed, the fact that her convict husband was assigned to her was unique. She also became a landholder which was extraordinary. Lock's achievements throughout her life were remarkable even for a European woman in the nineteenth century, let alone an Aboriginal woman in Sydney.

Last of the aboriginals from Blacktown

'Last of the aboriginals from Blacktown' is written in black ink, slightly smudged, in the burial register of St Bartholomew's Church of England in Prospect. She died on 6 July 1878 and was buried two days later. Her age is recorded as 84 years, which would seem to indicate that she was born in 1794. However, other documentary evidence does not substantiate that date. She was probably born in 1808, although the actual date will never be known.

Maria grew up at Richmond Bottoms on the eastern floodplains of the Deerubbin, later known as the Hawkesbury River, close to today's town of Richmond. She was probably born in a sheltered place in the bush, but there is a possibility that a kindly family of settlers offered their rustic dwelling for the birth. Maria's early grasp of the English language and her later above-average educational performance leads one to believe that she had early and continuous contact with Europeans.

Her father was known as Yellomundee (Yarramundi) and her grandfather was Gombeeree. She had an elder brother called Colebee. Unfortunately, Maria's mother's name is unknown. But Maria's lineage can be traced back to before the First Fleet disgorged its cargo of convicts and military on to the tribal land of the Cadigal people in 1788.

Maria made her debut into white Australian history on 28 December 1814, when Aboriginal people congregated in the market place at Parramatta for the inaugural annual conference of the tribes. A feast was prepared consisting of roast beef, bread and jugs of ale. Yellomundee headed the Richmond tribe and among them was Maria. It was not necessarily a celebratory occasion for Maria or her family – following a short conversation with Governor Macquarie, Yellomundee placed his daughter in the care of William Shelley and his wife Elizabeth. She was to be tutored at their fledgling Native Institution, at which William Shelley was the headmaster and superintendent.

The creation of an institution for young Aboriginals was not Governor Macquarie's idea. Rather, it was William Shelley, a trader and former London Missionary Society missionary who proposed the experiment. The boys were to be instructed in agriculture and 'mechanical arts' and the girls were to be taught needlework.

Late in March 1819, Macquarie penned a letter to Lord Bathurst, in which he gave a glowing account of the Native Institution and its Aboriginal children. Had he written a few weeks later, he would surely have waxed eloquent, following the performance of 11-year-old Maria at the school anniversary examinations, held at Parramatta on 13 April. She took out the major award, competing against almost 100 of the local European children. The Sydney Gazette on 17 April 1819 reported her achievement with an air of disbelief:

Prizes were prepared for distribution among such children as should be found to excel in the early rudiments of education, moral and religious and it is not less strange than pleasing to remark, in answer to an erroneous opinion which had long prevailed with many, namely, that the Aborigines of this country were insusceptible of any mental improvement which could adapt them to the purposes of civilized association, that a black girl of 14 years of age … bore away the chief prize.

Maria was the talk of the town, yet by late 1822 the 'Black Native School at Parramatta' was coming to an end. A new Native Institution was to be built beside the Richmond Road, at Black Town. Among the carpenters involved in the construction were two convicts, Robert Lock and his father, Jonathon. Robert, who was illiterate, was serving a seven-year sentence, and he certainly found Maria to be special. On the other hand, Maria may well have been attracted by Robert's fair and bright complexion and sandy red hair. He was five feet six inches (1.67 metres) tall.

A wife and a landowner

[media]On Monday 26 January 1824, the 36th anniversary of the establishment of the colony of New South Wales was being celebrated. While the noisy ceremonial was taking place in Sydney, with guns fired on the shore and cannon fired from the ships in the harbour, a more sedate ceremony was being performed inland at St John's Church, at Parramatta. The first officially sanctioned marriage between a young Aboriginal woman and a British convict was being enacted. 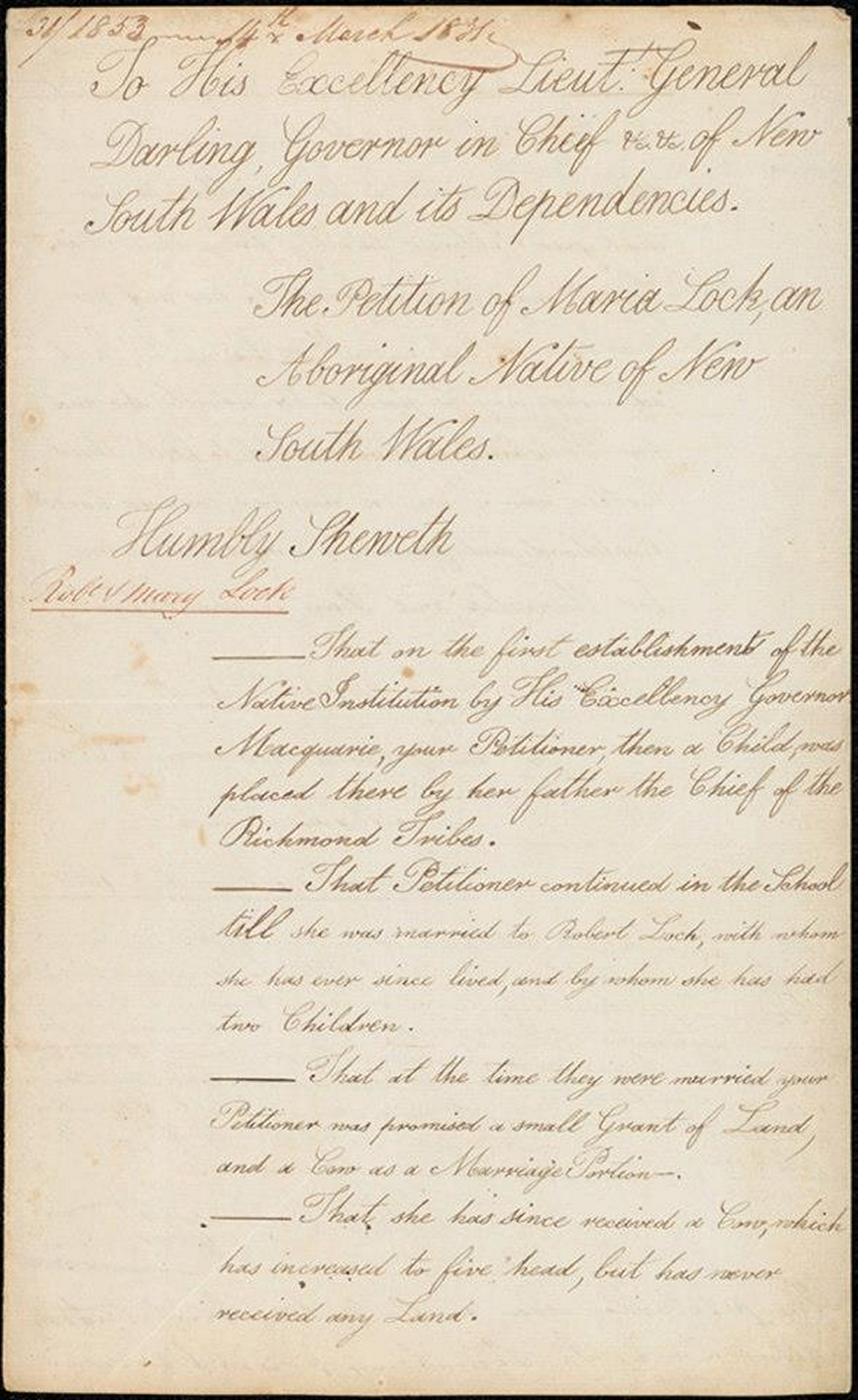 [media]One extraordinary event which could have put a strain on the marriage was the fact that Maria's convict husband was assigned to her, a 16-year-old Aboriginal girl. It is likely that this unparalleled assignment was a condition stipulated by the authorities before allowing the marriage to take place. Such an assignment was probably unique in the history of the convict era. 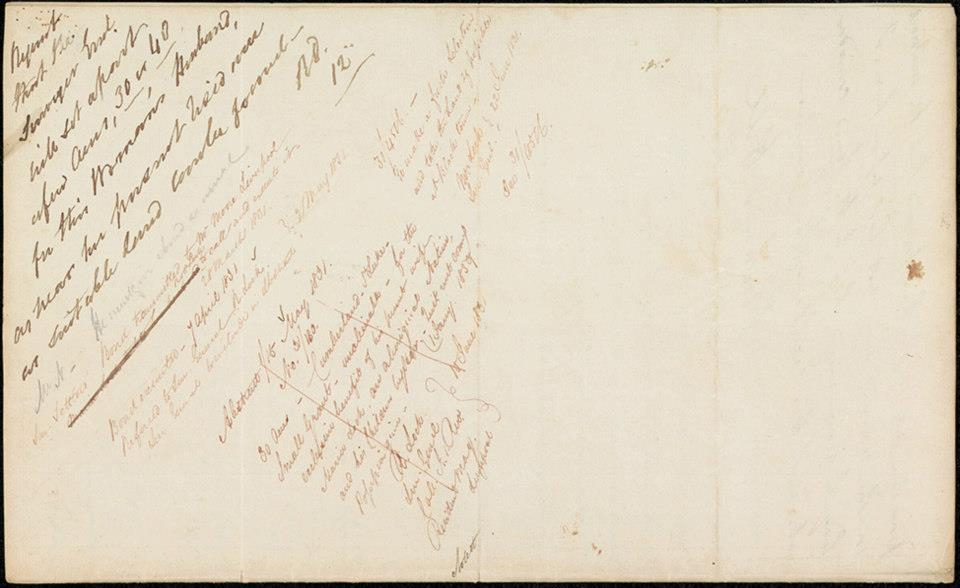 There is also some evidence to suggest that Maria had previously married Dicky, son of the renowned Bennelong.

Following the wedding ceremony, Robert and Maria returned to Black Town to settle on one of the farms allotted to Aboriginal married couples, adjoining the Native Institution. Four acres (1.6 hectares) of land was cleared and fenced, and a rustic timber hut was their home.

One year later they left Black Town, moving to the Reverend Robert Cartwright's farm at Liverpool, beside Cabramatta Creek.

At the time of her marriage, Maria was promised 'a small Grant of Land and a Cow as a Marriage Portion'. She had received a cow, but not the grant of land, so she asked for and received the 30 acres (12 hectares) of land which her brother Colebee had been granted in partnership with Nurragingy in 1819. This followed a punitive expedition against troublesome Aborigines, for which both Colebee and Nurragingy acted as guides. This land grant was the first given to an Aboriginal person or group in Australia.

Robert Lock died, aged 53 years, on 23 August 1854. He was buried at St Bartholomew's Church in Prospect. Maria survived him by 24 years, and on her death, all her land passed to her nine surviving children.

The death of this remarkable woman severed the last thread which had linked early Aboriginal–European contacts and Shelley and Macquarie's experiment to 'educate and civilise' the Aboriginal people at Parramatta and Black Town. Today the numerous descendents of Maria and Robert Lock are unreservedly proud of their ancestry and Aboriginality. Many of them still reside in the City of Blacktown, where the uniting of their Aboriginal and Anglo-Saxon heritage had its beginnings.

A and M Jackson, The Wedding Portion, the authors, 1981