[media]On 14 February 1916, Australian Imperial Forces (AIF) recruits housed in the training camp at Liverpool began a strike that turned into a riot and spread from Liverpool into Sydney. Although short-lived, the riot caused widespread damage, resulted in the death of one recruit, and provided fuel to the arguments of temperance campaigners that hotels in New South Wales should close at six o’clock. 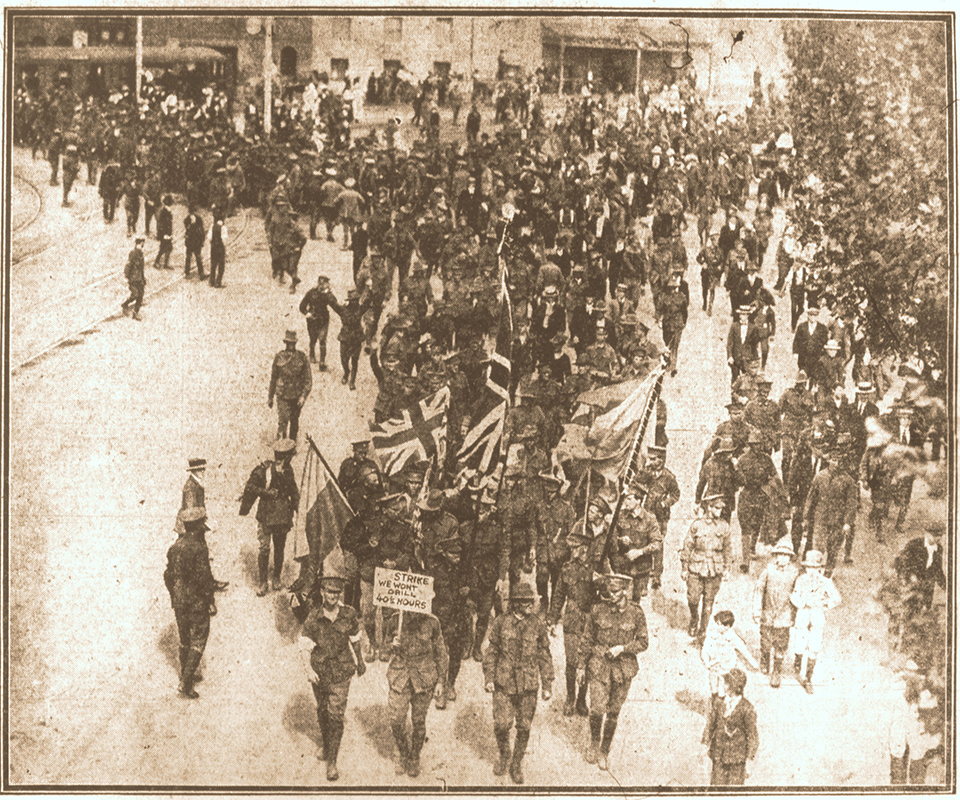 The origins of the Liverpool riot

In 1903, the Commonwealth Government established training bases in the Liverpool area and in 1914 these were expanded to cater for the flood of eager volunteers for the Great War. A camp was established at Casula to accommodate some of these recruits but after Prime Minister William Morris Hughes’ ‘Call to Arms’ led to an increase in numbers the Liverpool area became overcrowded trainee soldiers. Conditions were uncomfortable, the recruits wanted more flexible leave arrangements and a canteen serving alcohol, and they resented what they perceived as better conditions in the adjacent internment camp for ‘enemy aliens’, the German Concentration Camp at Holsworthy.

At the morning parade on Monday 14 February 1916 the recruits at Casula were told that their weekly training would be increased from thirty-six to forty and a half hours. Some considered this the last straw. They decided to strike, probably not considering the full implications of army recruits defying military authority in a time of war. The word spread rapidly and by late morning about 3,000 men marched into Liverpool where they persuaded recruits from the main camp there to join them. A large and noisy crowd swarmed into the local hotels demanding free beer and spirits. The stocks of several hotels and other local businesses were ransacked. The local police were powerless to stop the riot.

[media]From about 10 am the mob started to invade the Liverpool Railway Station and commandeered trains to Sydney. An hour later the first train reached Central Station and disgorged a load of several hundred half-drunk soldiers who formed up as if on parade. They began to march up George Street, behind a Union Jack and a placard protesting about the increased training load. Hardly surprisingly, discipline broke down and recruits raided street fruit stalls and commandeered passing vehicles. The police were unable to stop them although the ranks of men marching thinned as they passed pubs along the way.

As each train from Liverpool arrived, more drunken troops swarmed into different parts of the city causing havoc and damage in every direction. Train services from Liverpool were eventually suspended but not before the area from Central Station to Circular Quay had been virtually taken over by the rioters. Hotels were raided and those that tried to close their doors soon found them smashed and their bars filled with drunken men taking what they wanted. One group marched on Tooth’s Brewery at Broadway and another invaded the Queen Victoria Markets and ransacked the stalls. Italian and Greek shops were a particular target. Regent Street Police Station was attacked in a vain attempt to rescue rioters who had been arrested. The German Club in Phillip Street was attacked, as was Kleisdorff’s tobacco shop at the corner of Hunter and Castlereagh Streets.

The Battle of Central Station

The crowds of sightseers who turned out to watch the fun hampered the efforts of police to control the rioters. In the early evening soldiers were hurriedly brought in from the camp at the Sydney Showgrounds. This force, plus the debilitating effects of drunkenness on the rioters, enabled the authorities to herd most of them back to Central Station for the return journey to Liverpool. Late in the evening, a still angry mob at the station threw missiles at the police and the military pickets. In the chaos, shots rang out and Ernest William Keefe, a 20-year-old trainee in the Light Horse, was killed, while seven in the crowd, including a civilian, were wounded. This incident had a sobering effect on the mob; some surrendered reasonably quietly to the police and many returned to their camp to recover from the excitement of the day and to sleep off their alcoholic excess.

In the weeks that followed, courts martial resulted in the discharge of 279 trainees. Civil courts convicted 36 on charges including riotous behaviour, assaulting police, malicious damage and indecent language. The majority were sentenced to one or more months of hard labour while the ring leaders' sentences were up to five years. Most of the rioters escaped further discipline because of the authorities’ urgent need to meet recruiting targets; instead they were sent to the war. At the coronial inquiry into Keefe’s death the acting city coroner said:

It is to be hoped that the mutinous soldiers will, by their bravery on the battlefield, wipe out the stigma attaching to their name, owing to their participation in these calamitous proceedings. [1]

The riot had one unexpected result. The widespread drunkenness and the resulting destruction and damage not only alarmed the New South Wales Government but provided ammunition for the temperance movement to press its long-held case for restrictions on the availability of alcohol. Four months after the riot a referendum approved the 6pm closing of all hotels and pubs. The Bulletin denounced the link as hysterical, saying pub hours were no more to blame than the railway timetable, but six o’clock closing remained in force in New South Wales until 1955.

Reinecke, Carl. 'The Other Charge of the Light Brigade'. Griffith Review, 28. https://griffithreview.com/articles/the-other-charge-of-the-light-brigade/.