Darlington is[media] a small inner suburb bounded by City Road and Cleveland Street to the north, Abercrombie Street to the east, the old Eveleigh railway yards to the south and Golden Grove Street to the west. 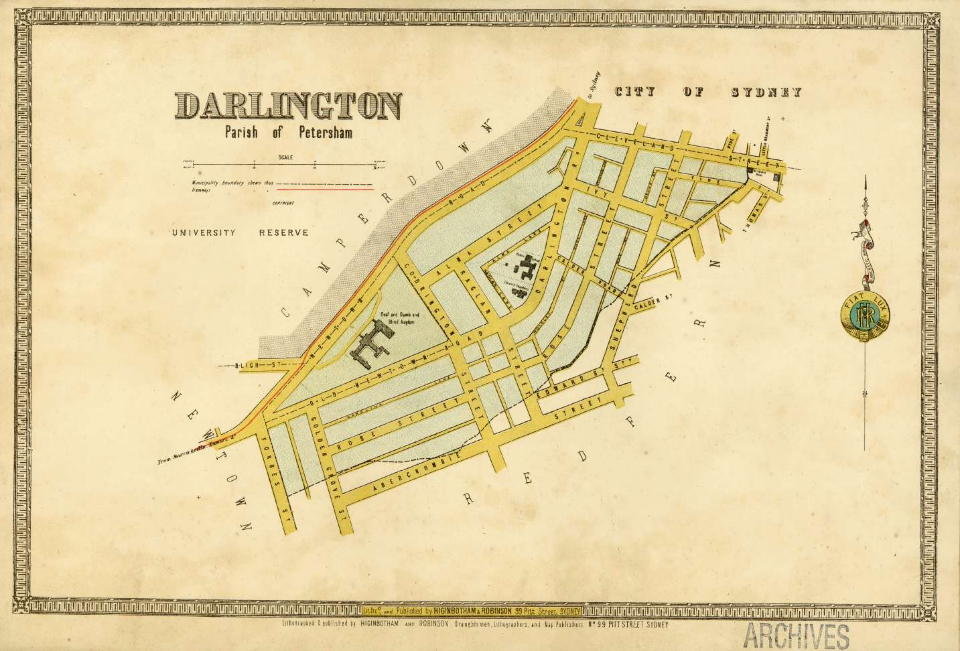 The land is undulating, and was once traversed by the Blackwattle Creek near its eastern border. The Gadigal people fished its waters and lived from the tall turpentine and ironbark forest that its rich soils once supported.

[media]These physical qualities also made it attractive to early colonists. Darlington lies within the original crown reserve set aside by Governor Phillip for school lands, known as Grose Farm. The part of this reserve which is now Darlington was allocated to the trustees of the Female Orphan School. The school leased it to timber-getters, who cleared part of the land. After 1819 the land was reissued to various colonists, including William Hutchinson and Thomas Shepherd. These grants, along with one to neighbour William Chippendale, all straddled what would eventually become Cleveland Street, and in the early decades of the nineteenth century the name Chippendale was applied liberally to all of this land.

These men valued the area for its fertile soils, and Shepherd's 1827 grant carried a caveat that he should 'establish a nursery and fruit garden thereon within two years'. In deference to the governor, Shepherd named the house he built Darling House, and called his business the Darling Nursery. From this came the name Darlington. Shepherd was a leading horticulturalist in Sydney for many years, and street names such as Rose and Ivy refer to the nursery, while Shepherd's experiments with vineyards gave the name to Vine Street. Hutchinson, whose land was in the area now known as Golden Grove, cultivated extensive beds of watercress.

Cleveland Street, which eventually became the formal dividing line between the older suburb of Chippendale and the newer one of Darlington, was not completely surveyed until the mid-nineteenth century, and in 1860 there were fewer than a dozen houses on this road. By 1880 terraces had begun to appear, and there were four pubs, though free-standing cottages and some vacant land still remained.

In 1842 this street had been gazetted as the boundary road for the City of Sydney. When residents south of this line petitioned in 1864 to become part of the City, their request was rejected, and so they formed their own separate, tiny municipality. The last open land, Shepherd's nursery, was subdivided in 1883, and the area was rapidly built out with mean working-class terraces and narrow streets. The first council chambers were a simple wooden building, but by 1878 a purpose-built Town Hall stood in Darlington Road, with a public school next door. By 1885 the council had sewered the municipality, and by 1890 the roads had been sealed. The area was well served by trams, and work was provided by the Eveleigh railway workshops, opened in 1882, and factories, especially in Chippendale. The municipality was characterised by stable councils, and several long-serving mayors, and aldermen. William Graham may have created a municipal record by serving on the council, sometimes as mayor, from 1887 to 1931. In 1948 Darlington was amalgamated with the City of Sydney, subsequently spending time in the South Sydney municipality from 1968 to 1982 and from 1988 to 1992.

By far the grandest building in the area was the Institute for the Deaf, Dumb and Blind on Newtown (now City) Road. It was the largest such institution in the country, and over time its presence in the landscape grew as new floors were added and extra wings and buildings constructed. A supervisor's residence built around 1886 was undoubtedly the finest house in Darlington. The Institute was commandeered for an emergency hospital during the influenza outbreak of 1919, and to house members of the Royal Australian Air Force during World War II.

Other charitable organisations with a presence in the area included the Convent of Mercy in Forbes Street, St Michael's Hostel for the homeless at 150 City Road and the Sydney University Settlement. This organisation, which followed the English academic tradition of assisting the poor through practical help and social reform, was formed in 1891 by the University Women's Society. It purchased a hall in Edward Street in the 1920s, and over the following decades bought up surrounding houses to provide low-cost accommodation for the poor. From the 1970s it mostly provided low rents and services to the Aboriginal population.

By the early twentieth century, a picture theatre in Wilson Street and the Surryville Dance Hall in City Road provided local entertainment, while several tram services gave ready access to city lights. And while Hollis Park and a couple of small playgrounds provided a niggardly amount of public space, Victoria Park, one of Sydney's best, was readily accessible across City Road. But immediate attractions were few, and industrial activity was strengthening its hold over residential Darlington, with numerous small factories and workshops dislodging housing. Henry Jones & Co's IXL jam factory between Golden Grove and Forbes streets was the largest factory in the area and a symbol of its residential decay. By now outsiders considered Darlington a slum.

The advance of the University of Sydney

The social trajectory of inner city 'slums' was mostly upwards in the later part of the twentieth century, as once despised terraces acquired a new trendy status. But any such chance for Darlington was stymied by the predations of the University of Sydney, which viewed the area as essential to its expansion after World War II, and obliteration was the only course it was charting for the suburb. It acquired 'special zoning rights' under the County of Cumberland Planning Scheme, adopted in 1951, and from 1958 it began acquiring Darlington properties. In 1960 the state formally permitted it to buy up all land in a specified area of 36 acres (14.5 hectares), without regard to the usual planning regulations. At the time, this area included 416 houses, 28 house/shops or shop-only buildings, 47 factories, five pubs, a dance hall (the Surryville) the Royal Institute for the Deaf, Dumb and Blind, the Darlington Town Hall, post office and public school. This decision blocked further development in the area, and generated widespread uncertainty for residents and local businesses.

The first major university building in Darlington was the first stage of the Architecture building (The Wilkinson Building) which opened on City Road in 1959. The first construction in the new Engineering Precinct along Shepherd Street was the Civil Engineering Building which opened in two stages in 1961 and 1963, followed by Chemical Engineering in 1965. The entire Faculty of Engineering had transferred to Darlington by 1974. The Institute had been purchased and its grounds cleared for the new Merewether Building. Streets were built over or realigned, with Alma Street and parts of Darlington Road forming a new Maze Crescent, named after Harold Maze, the university's registrar (1950–55) and deputy principal (1955–73). Part of Codrington Street was renamed Butlin Avenue, after Syd Butlin, Professor of Economics from 1946 to 1971.

By 1970 most of the 36 acres had been acquired with federal government funds made available through the Universities Commission, while beyond this zone the university used its own funds to buy additional residential land. The university's push into Darlington was destructive for the community, which witnessed a steady collapse in amenities. At first properties were left vacant, but vandalism and the bad image for the University that resulted from this practice led to a new policy of immediate demolition. This led to the equally unattractive proliferation of vacant weed-infested land where once people had lived.

As a result of widespread opposition from residents, at the end of 1975 the federal government instructed the university to halt its expansion. In 1976 a report to South Sydney Council recorded a landscape in disarray, and widespread resentment of the 'university takes all' attitude which rode roughshod over planning regulations, providing no transparency, no master plan and no consultation. [1] By this time other branches of engineering were housed in Darlington, as were a number of student amenities. Plans were well advanced to extend the School of Architecture and to build a multi-storey car park next to the new Seymour Centre, a performing arts complex at the corner of City Road and Cleveland Street. By then 650 houses had been demolished, the Town Hall had gone and the public school was moved to new premises in Golden Grove Street at the end of 1975. At the same time, the state government's proposed inner-city freeway system, which was later shelved, threatened another 130 houses in Wilson Street.

Most of the school buildings were demolished over the Christmas period in 1975, but plans were altered to allow retention of the original stone school house, which was upgraded for use by the university's Music Department – the first reluctant admission by the university of any obligations to the heritage of the area.

The university's expansion in the following decades was much slower. One of the casualties of the cutbacks after 1975 was a purpose-built home for the Power Institute of Fine Arts, intended for City Road, on the site of some corrugated metal sheds constructed as temporary workshops for the CSIRO in the 1950s, and used by the university's Art Workshop from 1968. The first director of the 'Tin Sheds' was Bert Flugelman, whose bold sculptures grace parts of Sydney today.

Intended as a temporary solution, the Tin Sheds remained in use until 2007, acquiring a reputation for radical experimental art along the way. Some of Sydney's best artists in ceramics and sculpture cut their teeth on ideas generated in these less than adequate surroundings. [2]

After 2000 there was a resurgence of university activity in Darlington, including extensive new student services buildings on City Road, to be known as USYD Central and an IT Centre adjoining the Seymour Centre on Cleveland Street.

But by the twenty-first century many of Darlington's long-term residents had moved on. The population remains small, and with the passage of time it has become more accepting of the presence of the university. According to the 2001 census, the 899 remaining houses in Darlington – all terraces or apartments – housed just over 2000 people. In stark contrast to the ones who were pushed out, these residents were twice as likely to have a tertiary degree as the average Sydneysider, and recorded high levels of internet and computer usage. Thirty nine per cent claimed to be 'professionals', compared with a Sydney average of 22 per cent.

The university is proud of its current heritage-sensitive interventions into the landscape of Darlington. The old school is being restored, and will become the focus of a natural amphitheatre being created nearby, to be called Maze Green. Here the landscape designers intend to plant lemon-scented gums in the area where Hutchinson once had his Golden Grove estate. And over at the 'back end' of what is now called the 'Darlington Campus', at the corner of Shepherd and Lander streets, a boardwalk has been created across a wetland that captures rainfall runoff from surrounding tennis courts and pavements. This is used to water some of the university's gardens, with excess flows going back into Blackwattle Bay.

[1] James Colman Pty Ltd, 'Darlington and the University of Sydney: a report to the Council of the Municipality of South Sydney …', 1976