Rydalmere, a suburb of the City of Parramatta, is [media]based on land granted to Philip Schaeffer, who was briefly a superintendent of convicts on the government farm established at Rose Hill in 1788–89. Because the land around Sydney Cove was unproductive, Governor Phillip began building up the Rose Hill settlement on the more fertile ground at the headwaters of the river that fed the harbour. In 1791 it was renamed Parramatta, the word used to describe the site by its traditional owners, the Burramattagal people. To promote agriculture there, Phillip gave 140 acres (57 hectares) to Schaeffer because he had farming experience. The grant of land, on the northern bank of the Parramatta River, was formalised in 1792. 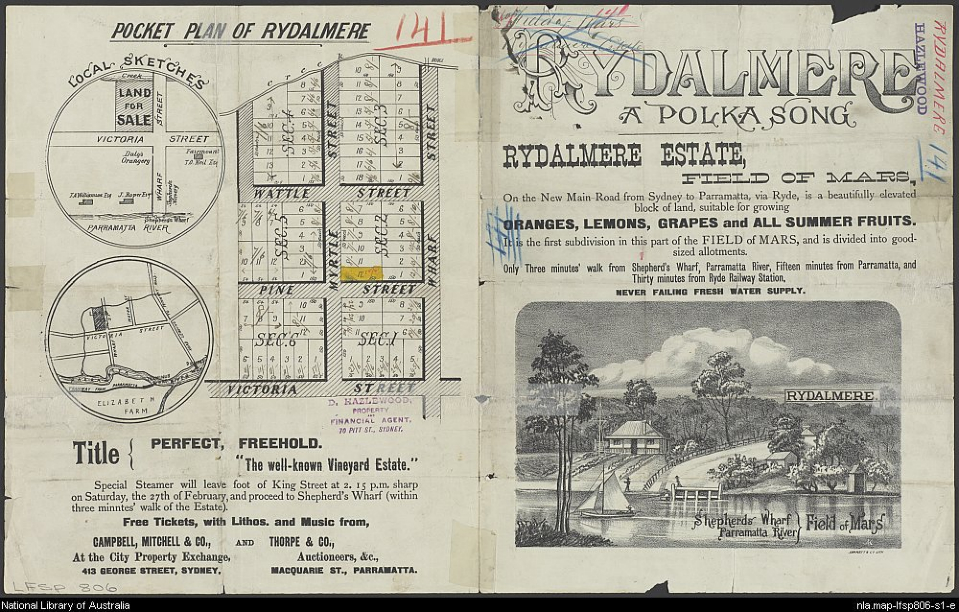 The Vineyard and the Parramatta gentry

Schaeffer [media]called his farm The Vineyard and it prospered – producing wine as well as wheat, corn and tobacco – until he sold it to Captain Henry Waterhouse in 1797. Waterhouse was the first to import merino sheep into the colony and bred them successfully at The Vineyard. In 1813 he sold the property to Hannibal Hawkins Macarthur, nephew of John Macarthur, who owned the Rosehill estate on the opposite bank of the Parramatta River. The new owner would gradually extend The Vineyard estate, buying up waterfront land as far as the present-day Spurway St (in Ermington). 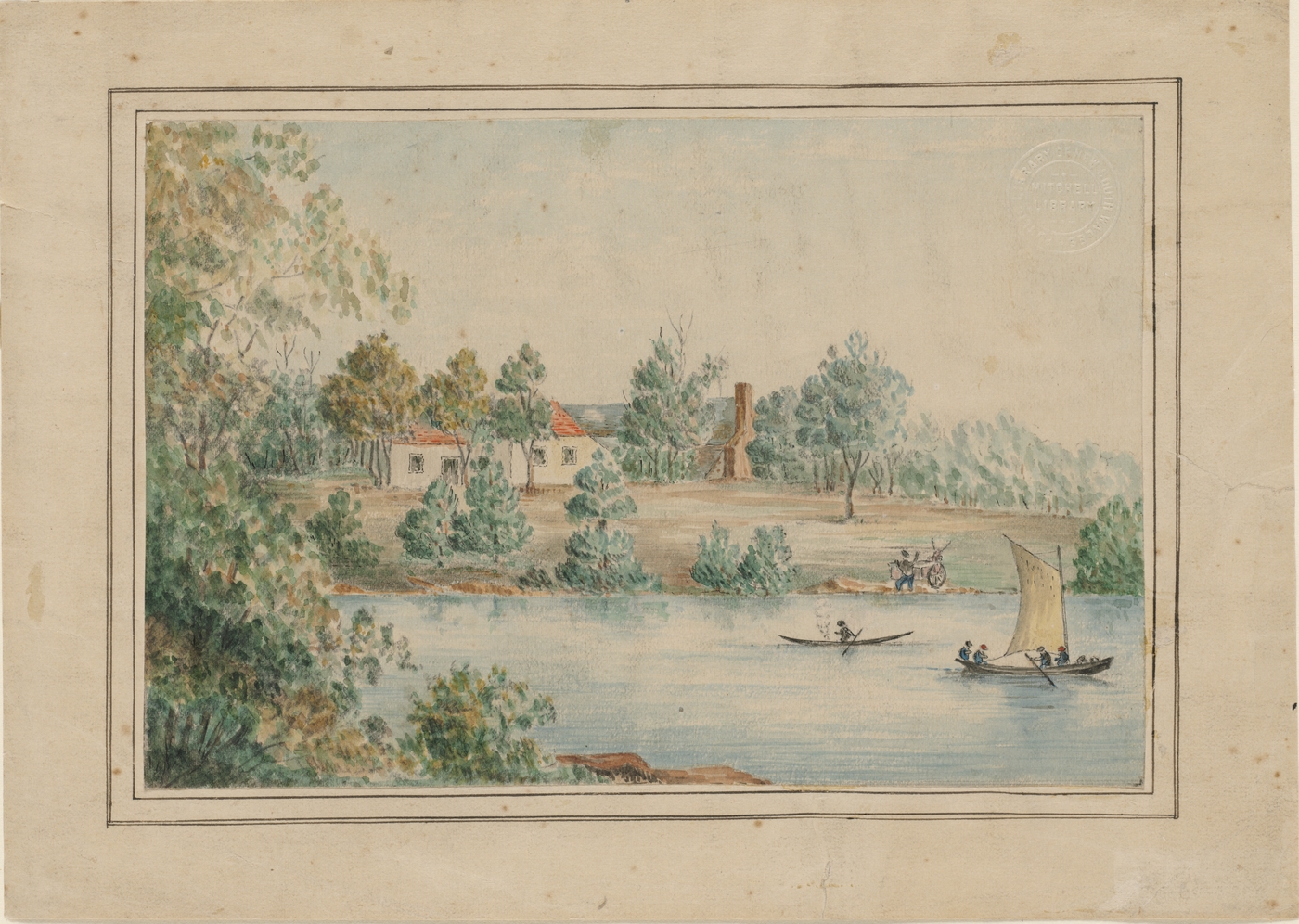 The Macarthurs were leading members of a group of large landowners, all of them free settlers, who were known as the 'Parramatta gentry'. Hannibal was a magistrate and joined the managing committee of the Female Orphan School Asylum, built by Governor Lachlan Macquarie in 1813–18 on land west of the Vineyard estate. This three-storey brick structure (modelled on Elizabeth Macquarie's family home in Scotland) was one of the first Palladian buildings in Australia.

In the 1830s, Hannibal Macarthur confirmed his social status by commissioning John Verge to design a neo-classical mansion at the Vineyard. However, heavy losses in the depression of the early 1840s forced him to sell his estate in 1848. It was bought by JB Polding, the Catholic Archbishop of Australia, who set up a community of Benedictine nuns there. In 1851 the nuns opened a girls' boarding school in the house, which had been renamed Subiaco. The school survived for 70 years, although the Catholic Church progressively sold off most of the land of the original estate. One of the early buyers gave the surrounding area its name: it was in 1886 that the orchardist Thomas O'Neill, who came from Rydal in the English Lake District, advertised the subdivision of 'Rydalmere'. [media]Three years later, Rydalmere was incorporated into the new municipality of Dundas, but in 1891 the adjoining districts of Rydalmere and Ermington seceded to form an independent municipality. It lasted until 1949, when the area was included in the enlarged City of Parramatta. 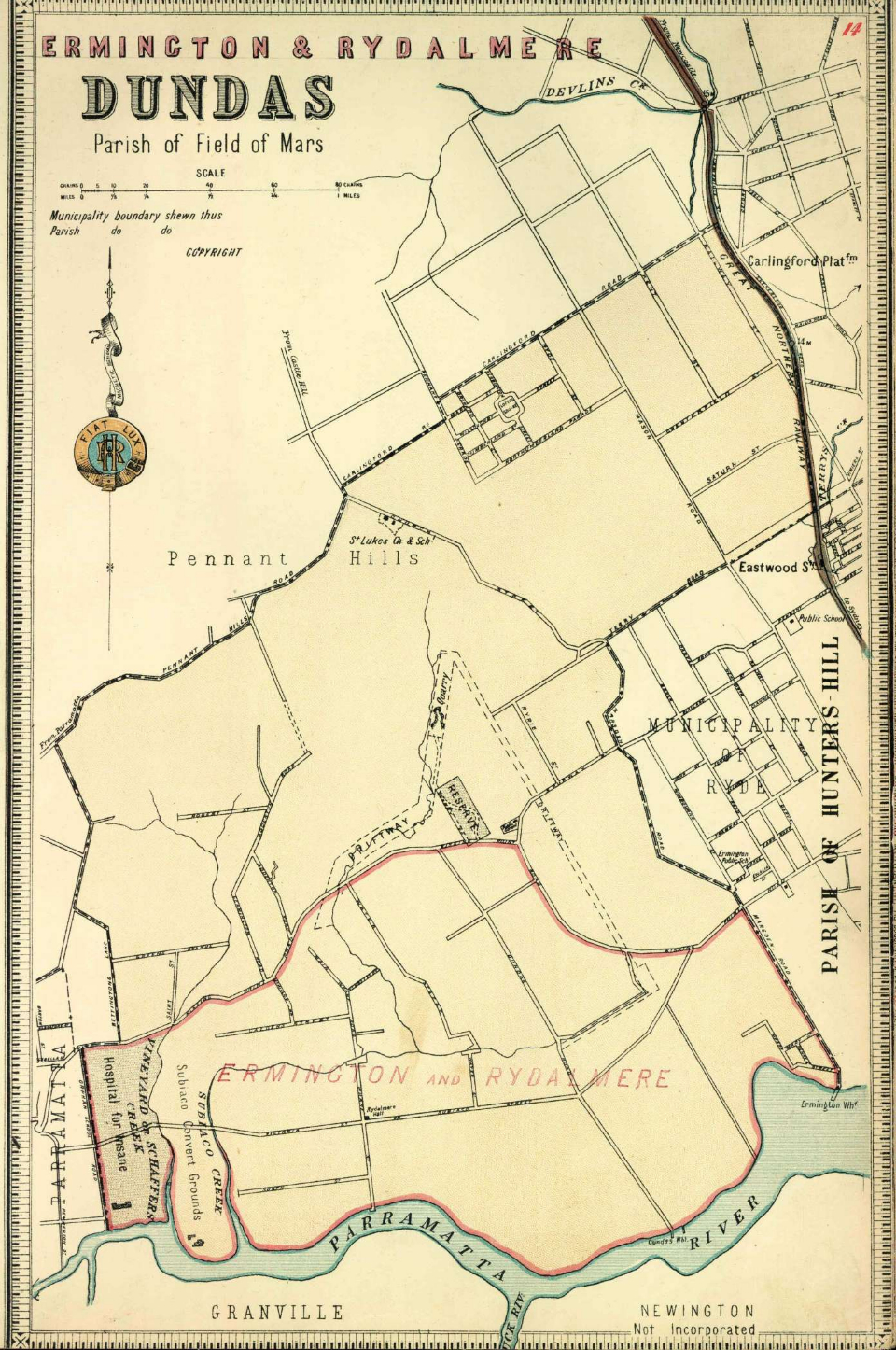 Despite the construction of a major road (now Victoria Road) through Rydalmere in 1887 and a rail connection to Clyde and Carlingford in the 1890s, Rydalmere remained semi-rural into the twentieth century, with orchards and later poultry farms and plant nurseries. Its notable landmarks were Subiaco and the Rydalmere Hospital for the Insane, which took over the premises of the Orphan School in 1888. The school, which accepted boys as well as girls from 1850, had closed the year before, because the colonial government preferred to 'board out' children rather than collect them in large orphanages. The hospital continued until the late 1980s, when another change of state government policy meant that mental patients, like the children before them, were 'de-institutionalised'. The school/hospital site is now the Parramatta campus of the University of Western Sydney, and the carefully restored Orphan School hosts conferences, educational tours and art exhibitions.

The history of Subiaco is very different. The Benedictine community stayed until 1957, but by then the mansion was encircled by industrial sites. Much of Rydalmere was still farmland before World War II: the 1930s Depression killed off some grand schemes for suburban subdivision. But the area's waterfront and rail connection had begun to attract heavy industry, and development accelerated after the war, when state planners designated Parramatta as a growth centre, and sections of Rydalmere were zoned as industrial land. By the 1950s, Rydalmere factories were producing goods such as steel and concrete pipes, hot water systems and earth-moving equipment. When the nuns left Subiaco, it was bought by Rheem (Australia) Pty Ltd and in 1961 – before the advent of green bans and resident action groups – the company demolished the house for a car park. Meanwhile the state Housing Commission acquired and built on swathes of Rydalmere: by 2001 the small suburb had a population of 1,475. Rheem, now producing solar water heaters, still has a factory in Rydalmere, while its industrial estate is accommodating hi-tech firms such as Interscan Navigations Systems.