[media]In 1816 Governor Macquarie inaugurated what are now the Royal Botanic Gardens and the Domain, on land that his predecessor Arthur Phillip had set aside as a 'Governor's demesne' late in the eighteenth century. 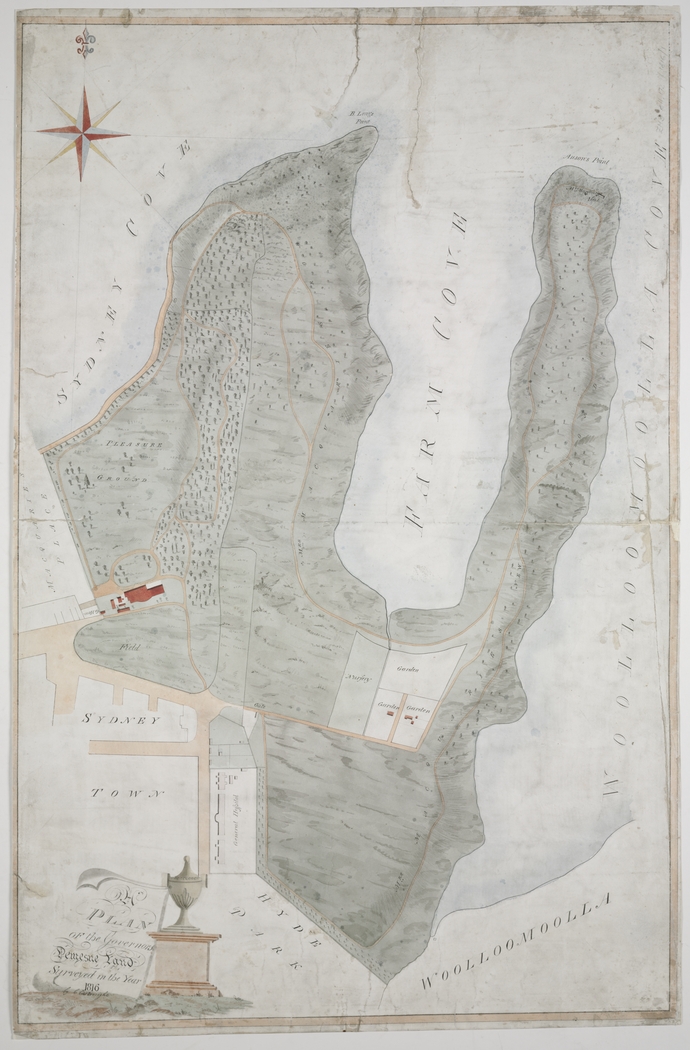 The subsequent growth of Sydney's magnificent Botanic Gardens was at the expense of the Domain. The Domain now exists only in four small precincts, where once it covered all the area from Woolloomooloo Bay to Circular Quay, and south to Hyde Park. Encroachments over time – such as in 1942, when Domain land was taken for naval fuel tanks, and more recently, when land was taken for ramps for freeways and traffic tunnels – have greatly diminished its original size.

Early governors were of the view that important 'cultural' buildings could be erected in the Domain, and they have been. Thus the Art Gallery of New South Wales, the State Library of New South Wales, Government House, the Opera House, and the Conservatorium of Music (in the old stables of Governor Macquarie) have all been carved out of the Domain, justified as adding to the 'cultural enclave'. But other things, such as the Eastern Suburbs Railway, the Harbour Tunnel and various freeway ramps and extensions, have taken more land over the years. Now the main part – Phillip and Crescent Precincts – lies in an area bounded by Hospital Road, St Marys Road, Sir John Young Crescent, and a ramp to the Cahill Expressway, and is but a small shadow of its former glory.

Everyone knows the story of what is now called Mrs Macquarie's Chair, a special seat carved out of a rock ledge at Ansons Point in the Yurong precinct, where the governor's wife could sit and take the sun, while watching life on the harbour.

The Botanic Gardens, blessed as they were over the years with an increasing array of spectacular and exotic plants and trees, drew various famous visitors, many of whom, like Anthony Trollope, often made comment in passing on the Domain which surrounded the Gardens. The Queen of Australia first set foot on Sydney soil when she stepped off a launch at Farm Cove in the Domain in 1954.

The Domain has long been a site for transgressive activities. In the days before affluence permitted many single people to get a room of their own, away from family or the prying eyes of landladies in boarding houses, the Domain could provide a pleasant setting for trysts of a sexual nature. In 1832, it is recorded that one Daniel Delaney, from Donoghadee, was charged with 'making love to a Shelah' [an Irish woman] in the Domain, at the 'unseasonable hour of 11 pm'.[1]

Not everyone objected to this. Sir John Robertson (five times Premier of New South Wales) remarked later in that century to a deputation protesting about immorality (sexual activity) in the Domain at night, 'clean grass is better than dirty sheets'.

Other commentators also noted the dangers that could lurk in the Domain at night. One respectable Sydney citizen, rolling home drunk at night, decided to sleep it off in the Gardens, and was robbed. This brought forth possibly the first reference to the 'push-gangs', in the 1850s. In 1998, David Murray, a former Melbourne art dealer (dubbed 'The Umbrella man' because he slept under a tent of umbrellas in the Domain), was murdered at the base of the Robert Burns statue there.

[media]But the Domain developed as a 'people's place'. From the 1850s, large crowds gathered there to participate in or observe such events as balloon ascents, parades and reviews, family picnics, weddings and official commemorations. Today, the Domain is home to big concerts, such as Opera in the Park or Big Day Out. And as would be expected in Australia, sporting events loomed large in its history. The 1850s Inter-colonial Cricket Match, between New South Wales and Victoria, set the pace, and even today, at lunch hours, the area resounds with the calls of goalies and umpires, and the grunts and screams of excited players in various sports. 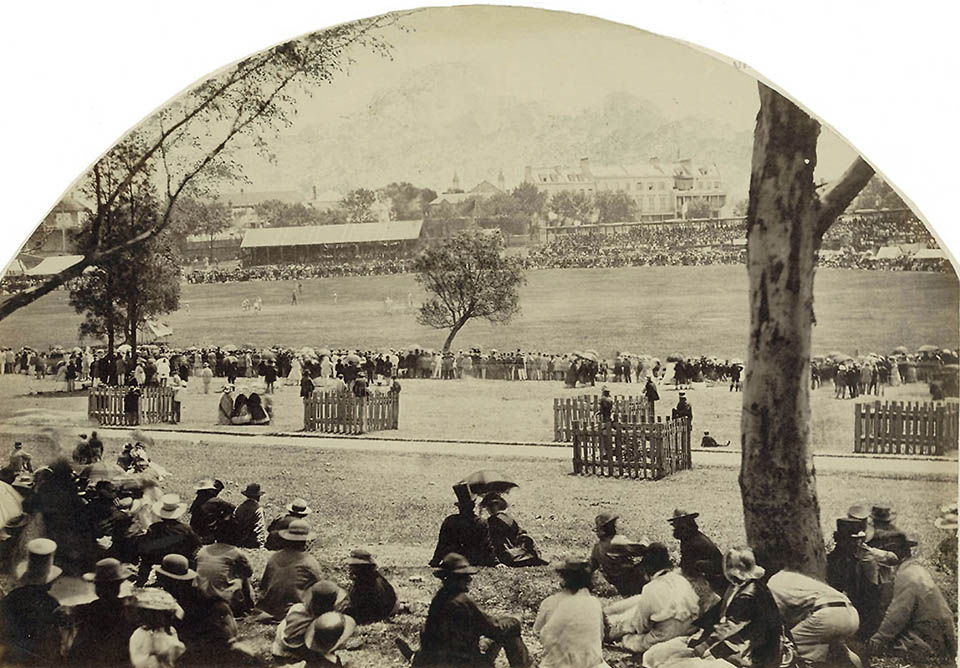 Home for the homeless

[media]In more adverse times, the Domain has also provided shelter for Sydneysiders, who dossed down there at night. Thus, in the various Depressions that have engulfed Sydney, the Domain has provided a haven for the homeless. In the 1890s there were hundreds of homeless men – the 'hobos' and 'sundowners' – 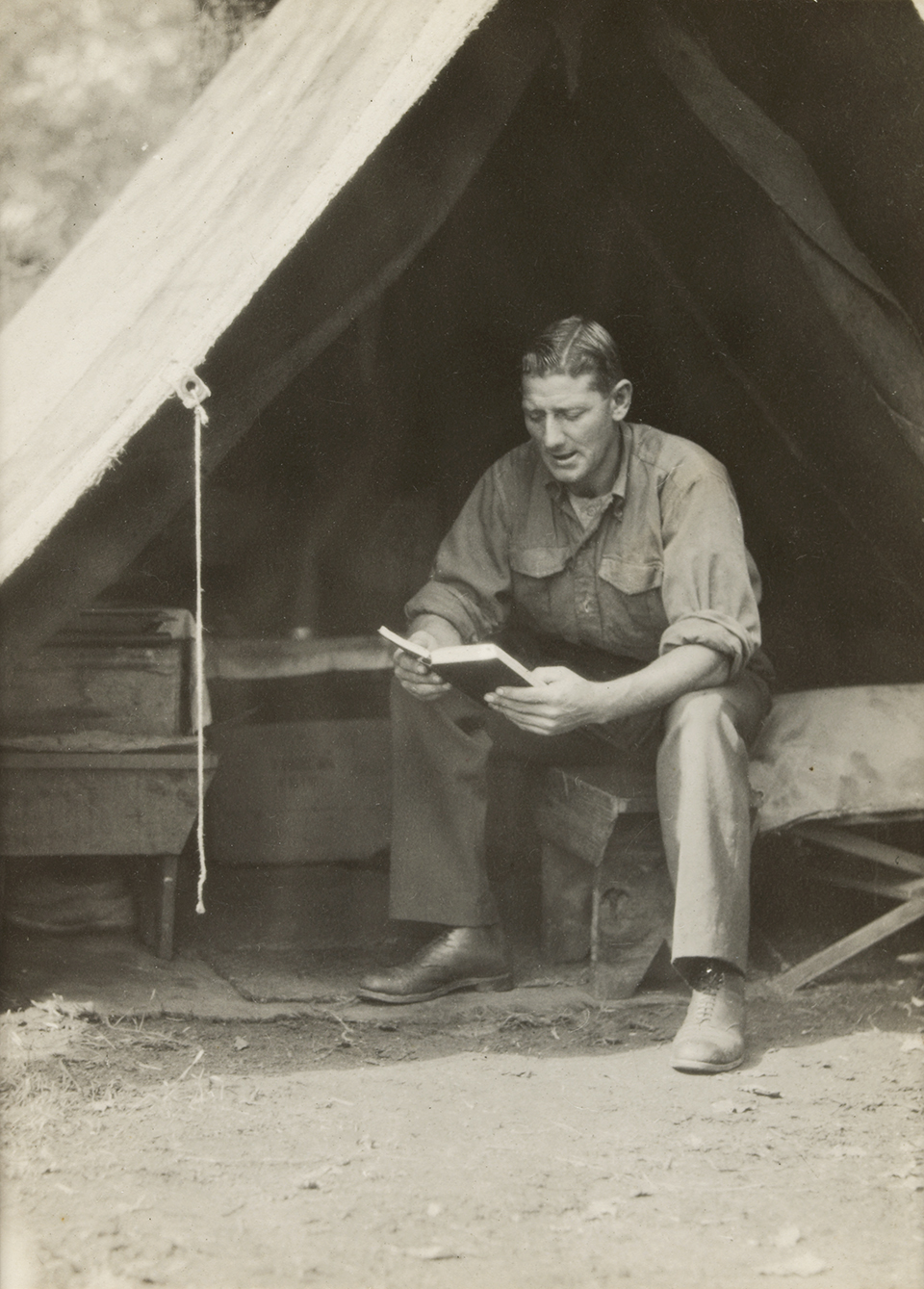 who nightly use the niches and crevices of the rocks as their dormitories, from the dim recesses of which they draw forth their 'bed-clothes', consisting of old newspapers and wrappers…. [2]

This was to recur in the 1920s when, as the Salvation Army noted, there were so many homeless men living in the Domain, that in a period of just 10 weeks they had supplied over 17,000 meals to them.

In the 1930s Depression, as more and more people lost their jobs and were evicted from their homes for falling behind in rent payments, shanty towns appeared in Sydney (as at La Perouse, Brighton-le-Sands, Manly, Engadine, and other places). In the Domain, villages of hessian and frame 'tents' appeared, and the unemployed and homeless gathered around camp fires at night, to wait for the billy to boil, and to gossip. This phenomenon was poignantly described in Christina Stead's novel For Love Alone.

[media]The Domain has also had an important history as a 'soap box' arena, like London's Speakers' Corner in Hyde Park. 'Soapbox Sunday' may well go back into the late nineteenth century: in 1878, Baptist pastor Allen is reported to have gone there to speak on Irish Home Rule, after a riot in nearby Hyde Park. The Domain's role as a site for dissent has continued strongly, with anti-conscription rallies there in 1916, and such contentious speakers as William Chidley (arrested for using the word 'coition' in public), Egon Kisch, Bea Miles, Ada Green who preached that 'hell-fire and brimstone would rain down on sinners', John Webster, a radical argumentalist, and 'The Skull', Sydney's own neo-Nazi.

[media]It has been the scene of class warfare, with demonstrations and pitched battles fought there between rival political factions in the 1920s and 1930s, when communists and the New Guard belligerently confronted each other. 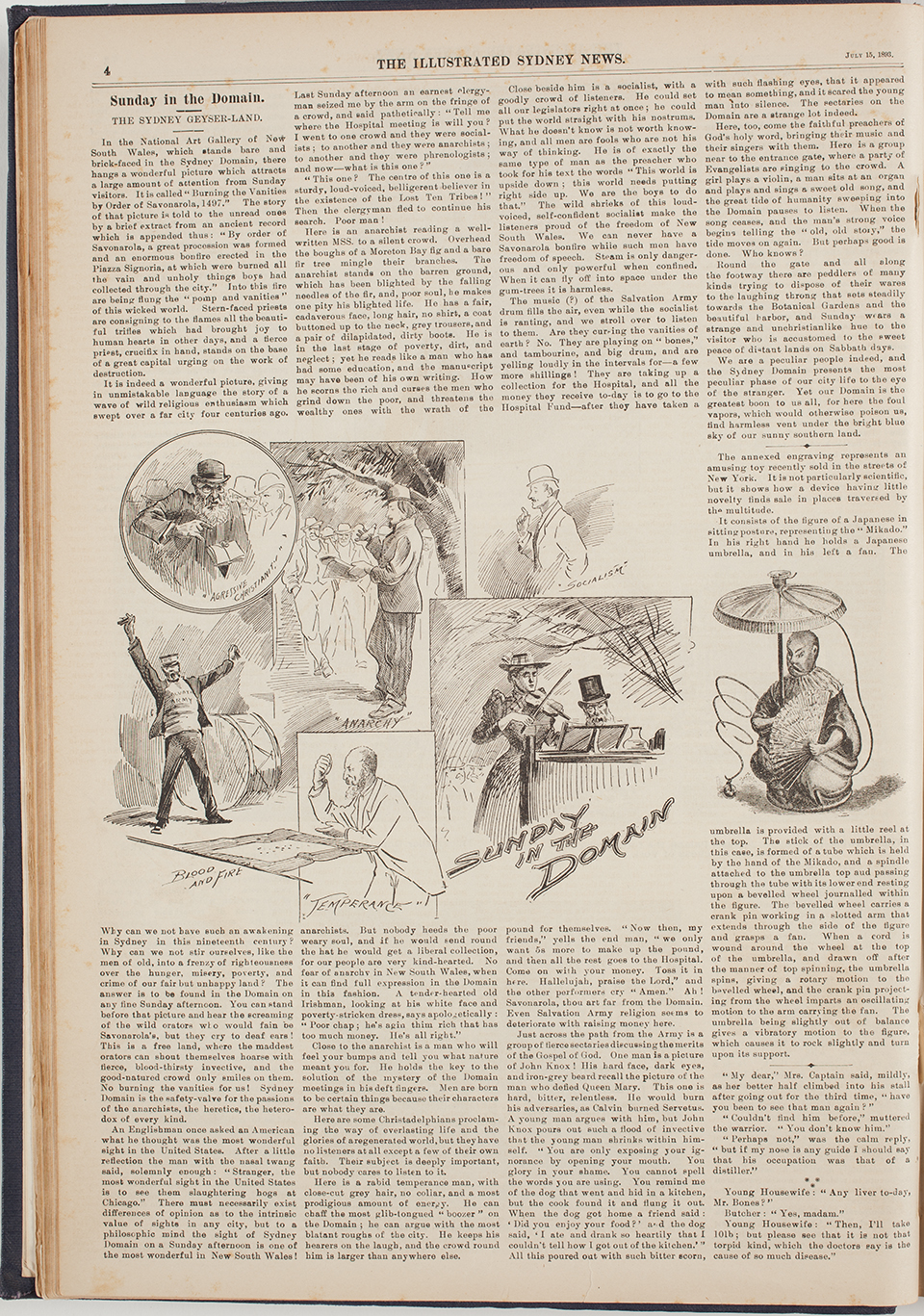 [media]Dissent in the Domain probably reached its peak in the 1960s, when the Vietnam War divided Australian society. It was the scene of large anti-war 'moratorium' demonstrations, and in the 1980s, of Palm Sunday peace marches. 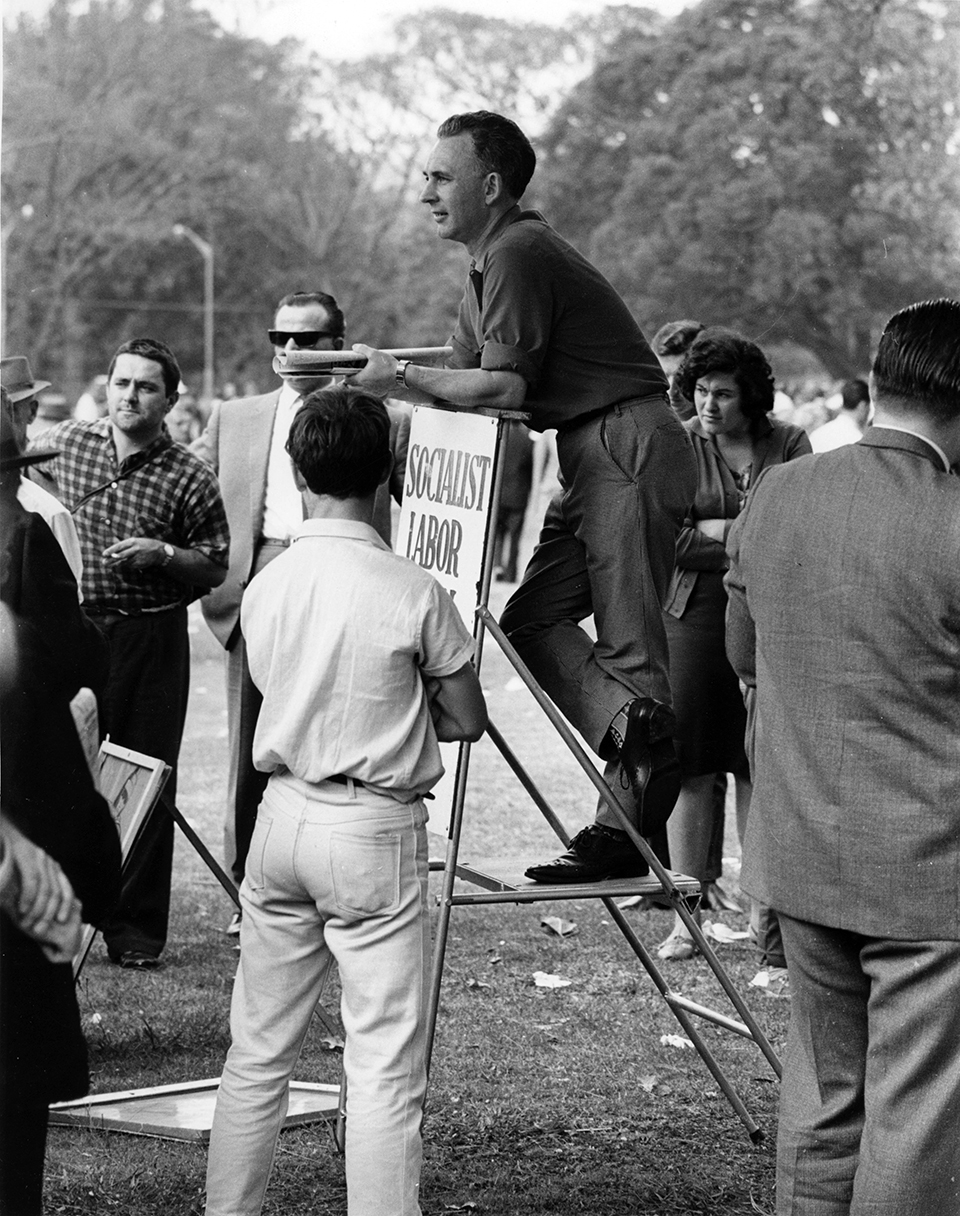 Hopefully, the Domain is nowadays protected from further encroachments – there is continual public outcry at schemes to further reduce its size. A backlash inspired by plans to use Domain land to build an access ramp to the Harbour Tunnel led to a more constructive approach, with 'new land' being created above the ramp to replace land that was taken away.

The Domain, part of Sydney's heritage since the earliest days of white history, is cherished by Sydneysiders and deserves to be preserved.

This entry was revised in September 2019 to update the quote about Daniel Delaney in the paragraph 'Outside Respectability'.