Parramatta Park is a major urban park and historic site in western Sydney. It was established in 1858 on the site of the former Parramatta Government Domain. The present parklands are 85 hectares in size, straddling the Parramatta River on the western edge of the Parramatta central business district. The National Trust‘s museum, Old Government House, sits within the park, and the parklands estate includes the Parramatta Memorial Swimming Centre, the Parramatta Golf Course and Old Kings Oval.

Parramatta Park is a '…palimpsest of different cultures occupying the same place'. [1] It was the core territory of the Burramatta clan of the Darug Aboriginal people. From 1788 it was settled as the Vice-Regal domain and the genesis of the second British colonial settlement in New South Wales. From 1858 a large section of the domain was set aside as a public park, a use which continues to this day.

Parramatta Park is regarded as one of Australia’s most significant and important colonial period landscapes. It was classified by the National Trust of Australia (NSW) in the 1970s and was entered on the Register of the National Estate in 1978. A Permanent Conservation Order under the NSW Heritage Act was made in 1989, and the place was entered on the State Heritage Register in 1999. More recently, in 2007, a large section of the parklands incorporating Old Government House was placed on the National Heritage List. [2] In January 2008, Parramatta Park was nominated by the Australian Government as one of 11 Australian convict sites for World Heritage Listing. It is recognised widely as an important and valuable place for conservation, education and research, as well as a major place for recreation, social and cultural activity and community events.

The Burramatta Aboriginal people occupied this fertile land which supported abundant animal populations and edible vegetation. They occupied the high ground around the creeks and rivers, and undertook a practice of regularly burning the landscape to manage the environment, resulting in a park-like character with tall trees and an understorey of native grasses.

Governor Arthur Phillip of the First Fleet explored the Parramatta River in April 1788, and by November of 1788 he had established a fortified camp or redoubt on the small hill overlooking the river in present day Parramatta Park. Phillip named the area Rose Hill in honour of George Rose, the Secretary to the British Treasury, as well as naming The Crescent – a natural landform feature scoured from the riverbank by erosion. [media]A government farm was established on the riverbanks, which by 1789 provided viable yields of grain for a colony struggling to survive. This was the first successful farm established in the colony. A government house was built on the hill overlooking the river and Phillip devised a town plan centred on a major boulevard one mile (1.6 kilometres) long and 200 feet (61 metres) wide on the axis of the government house and the wharf. Huts for convicts lined the road reserve, and around this the town of Parramatta grew. 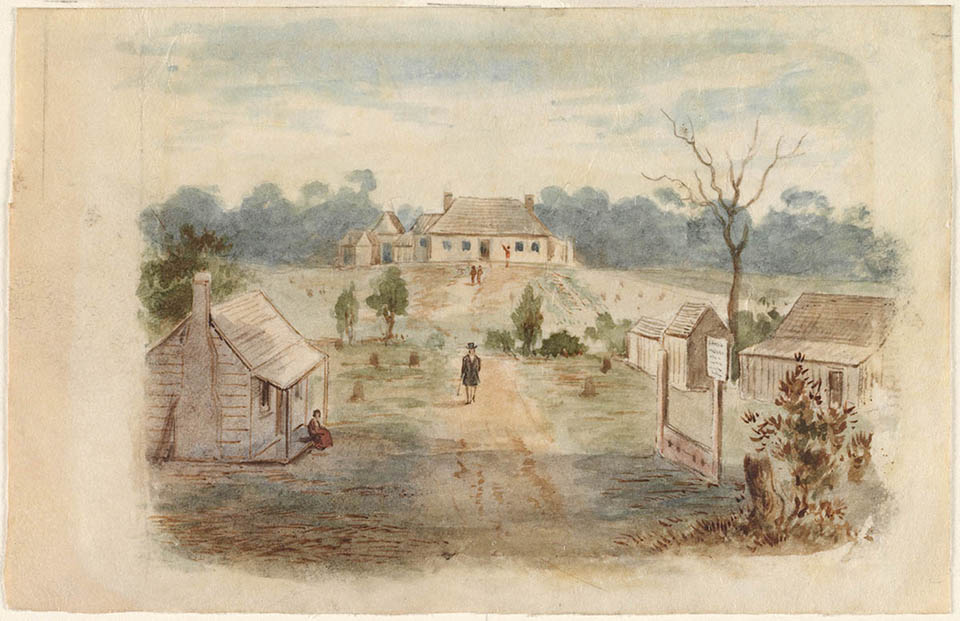 [media]The Parramatta Domain was a centre of administration of the penal colony and was the residence and office for ten governors of New South Wales from 1788 to 1857. Governor Hunter replaced Phillip’s small cottage in 1799 with a substantial Georgian-style two-storey house. Governor Lachlan Macquarie and his wife Elizabeth undertook extensive modification to the house between 1812 and 1818, enlarging Hunter’s house along the lines of a Palladian villa and adding a garrison building and stables. [media]They undertook extensive landscaping of the domain in the eighteenth century picturesque English landscape tradition. 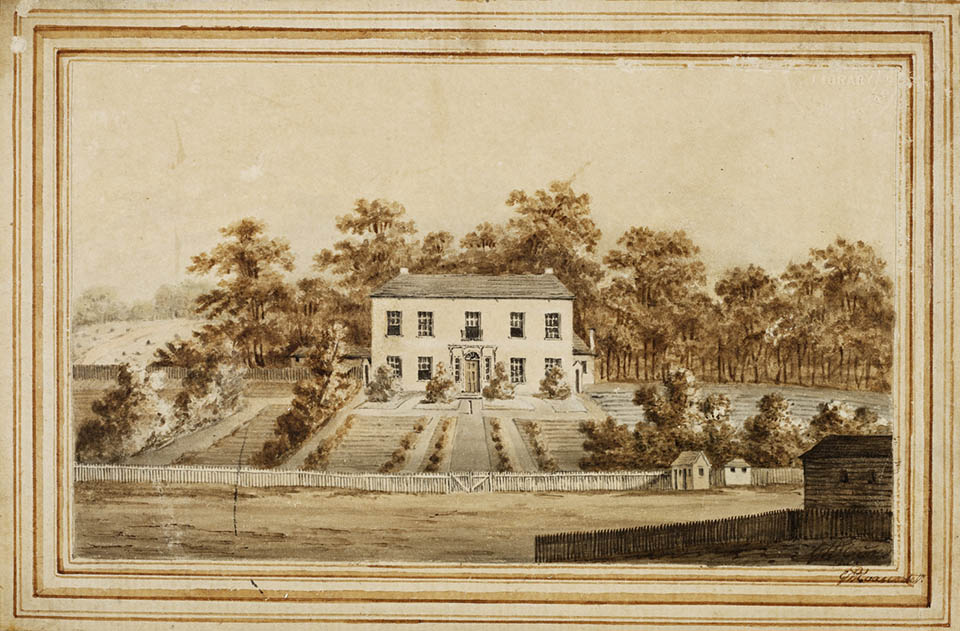 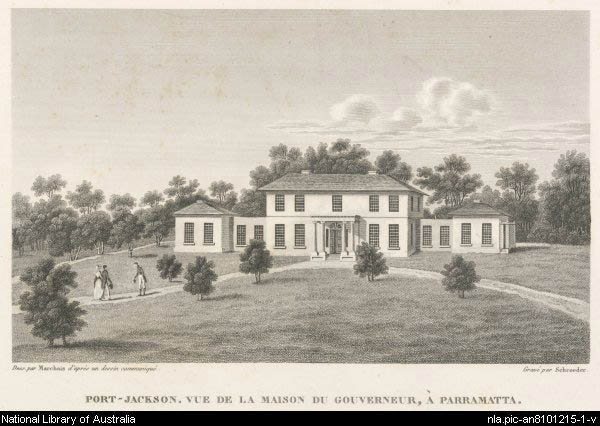 Governor Macquarie’s vision for the domain left a dominant and lasting impact on the landscape character of the park. In addition to the Governor’s house, which retains the Macquarie period form, the roadways, structures, cultural plantings, river and boundaries [media]all reflect the design influence of the Macquarie period, as does the town of Parramatta. 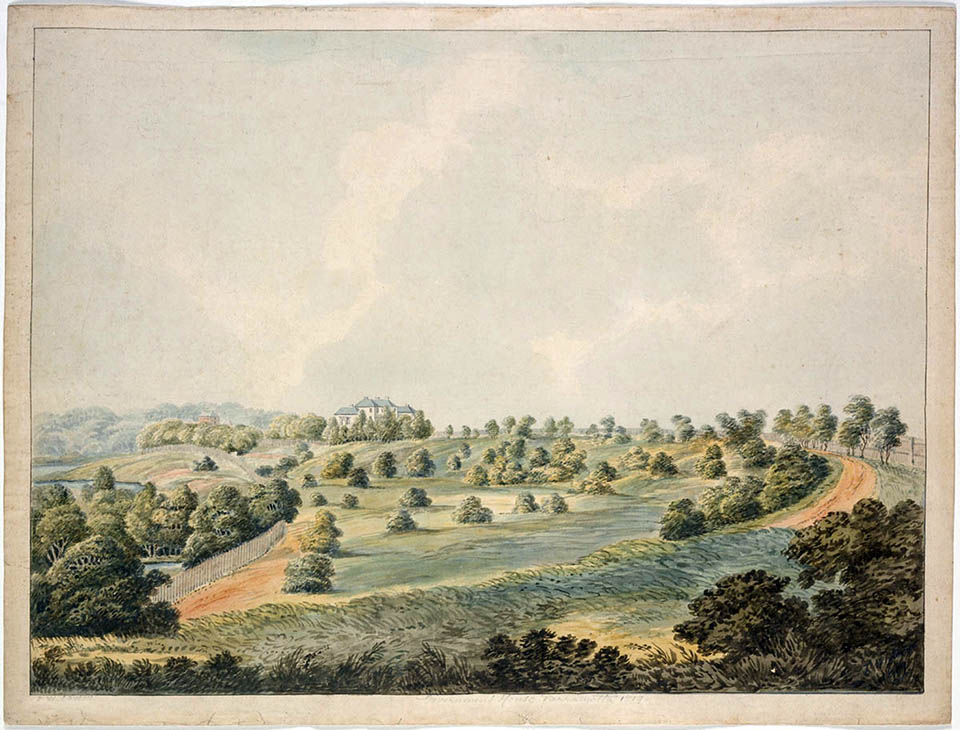 Governor Brisbane’s interest in astronomy led to the construction of an observatory on high ground above Government House and he engaged scientists Dunlop and Rumker to survey the southern skies. Brisbane also left his mark with a Bath House, completed in 1823, a building associated with colonial architects Francis Greenway and Standish Harris.[media] It was altered in 1886, as a pavilion for park amenity. 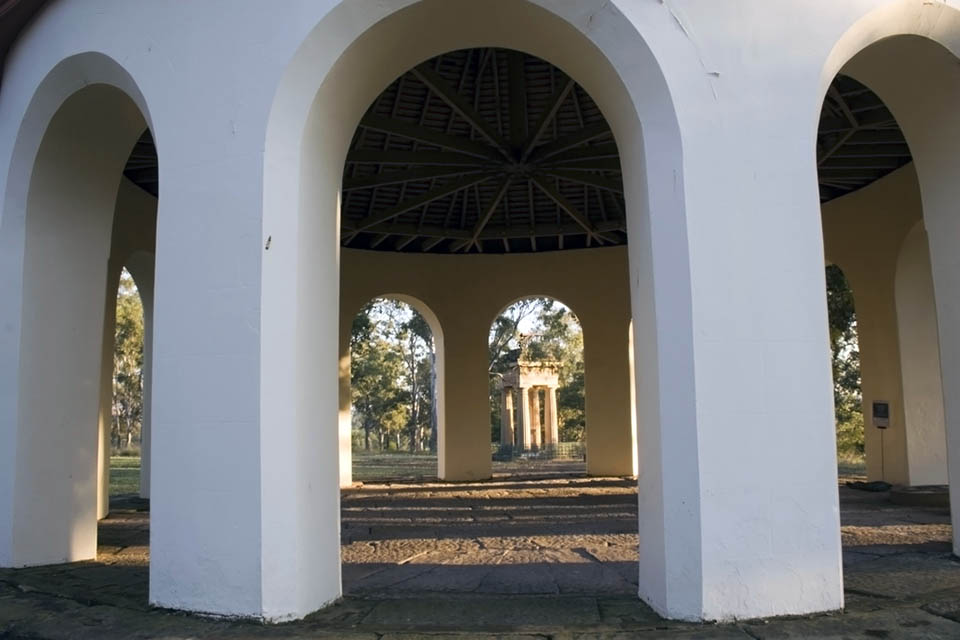 The Parramatta Domain was an important place not only of government administration, but of economic activity and research. A Government Lumberyard within the domain was the source of both building materials for the colony and trades for maintaining government buildings. A botanical specimen garden under George Caley operated from the domain, and ex-convict George Salter successfully managed a land grant there between 1798 and 1805. Between 1811 and 1815, Macquarie purchased his 30 acres (12 hectares) and cottage for dairying activities.

From Domain to public park

[media]The transition from Government Domain to park had its origins in local agitation for access to the domain. Macquarie created a largely private domain and pushed back the town. [3] In 1847 Governor FitzRoy gave land from the domain’s government farm on the northern riverbank for use as a public racecourse. From 1848, the Parramatta Citizens' Movement for Recreation in Open Lands continued to clamour for access to the domain for 'exercise and recreation in open grounds and pure air'. [4] Against the background of the worldwide public parks movement, the New South Wales Parliament in 1857 passed the Parramatta Domain Act to dedicate a minimum of 200 acres from the domain for 'a Park for promoting the health and recreation of the inhabitants of Parramatta.' [5] 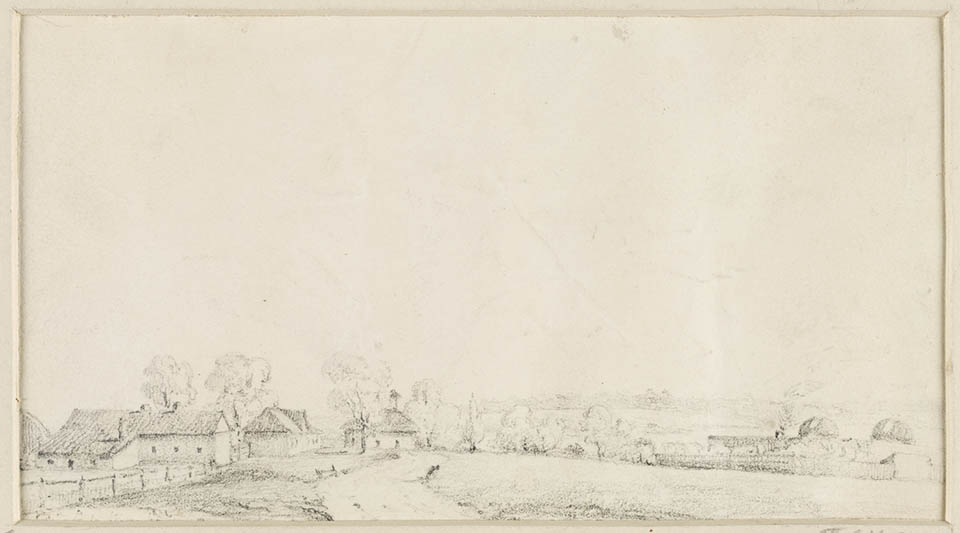 By 1858 the boundaries for a park of 246 acres (99.5 hectares) had been surveyed and on 6 August 1858 a trust was established to manage the park. A Victorian-era park was developed, using Macquarie’s vice-regal layout as the basis for circuit drives and exotic plantings. A dwarf stone wall and iron palisade fence was constructed in the 1880s along the eastern boundary. Slowly the landscape was shaped as a public park, with the construction of tree-lined avenues, the Rangers Cottage in about 1870, and a series of gate houses to facilitate Park management objectives. [media]These included the Queen Road gatehouse, 1873, and the imposing Tudor style gatehouse built in 1884 replacing Macquarie’s lodge at the George Street entrance. A third gatehouse was commenced at the Macquarie Street entrance in 1887 and a fourth gatehouse was built on the southern domain. Gatehouses were built also at Park Parade and at the Ross Street entrance in 1935. 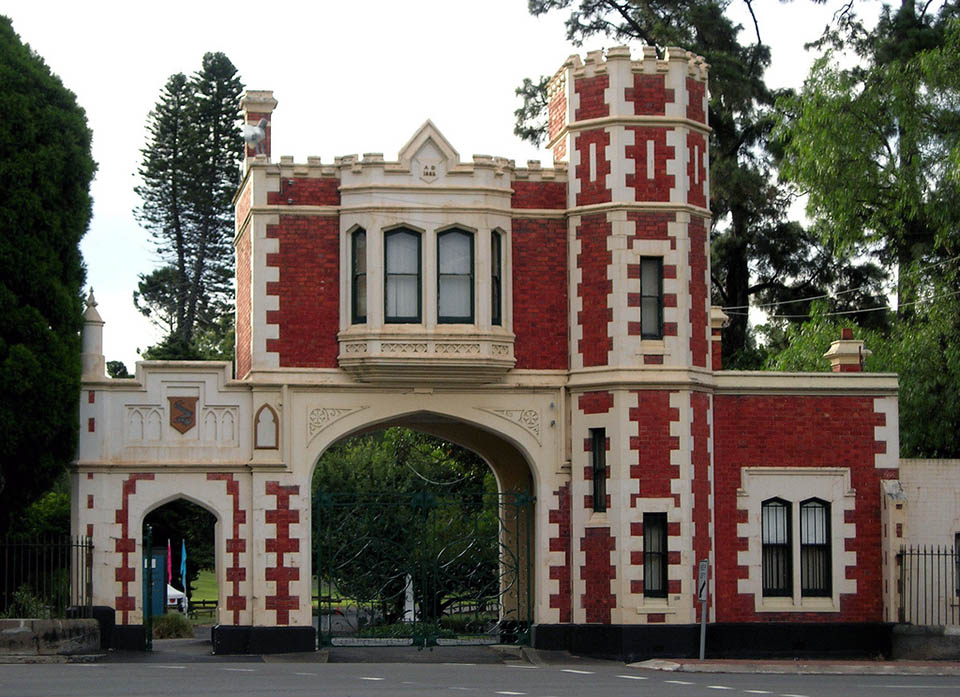 Sport was catered for through formal and informal recreation spaces. At one stage Parramatta Golf Club, established in 1902, occupied significant sections of the park with an 18-hole course, before occupying a 9-hole course on the southern domain of the park. Three ovals were constructed on the lands north of the river – Old Kings Oval, Cumberland Oval and a third, smaller field. Car racing and football were held there. Coleman Oval and a playing field on the southern domain were later additions. Changing facilities and toilets, picnic shelters and amenities were constructed as funds permitted and styles were as diverse as Victorian and twentieth century Bungalow.

In 1860 the extension of the Western Railway Line divided the park and necessitated the demolition of Governor Macquarie’s stables. This set a precedent for subsequent grabs for land from the estate, such as the allotment used for construction of Parramatta High School in 1913. Throughout the twentieth century, the park came under pressure from sporting and other interests, and substantial parts of the park estate were leased to sporting and licensed clubs. The King's School leased Old Government House from 1910 until 1967, when the school moved to North Parramatta and the historic house was transferred to National Trust of Australia (NSW) by an Act of Parliament. [6] The Parramatta RSL Club acquired a section of land fronting Pitt Street as freehold, and leases were given for the swimming centre and leagues club car park.

[media]There was vocal public opposition in the 1970s when The Crescent was filled to create a performance space, and again in the 1980s when Cumberland Oval was excised for construction of Parramatta Stadium. 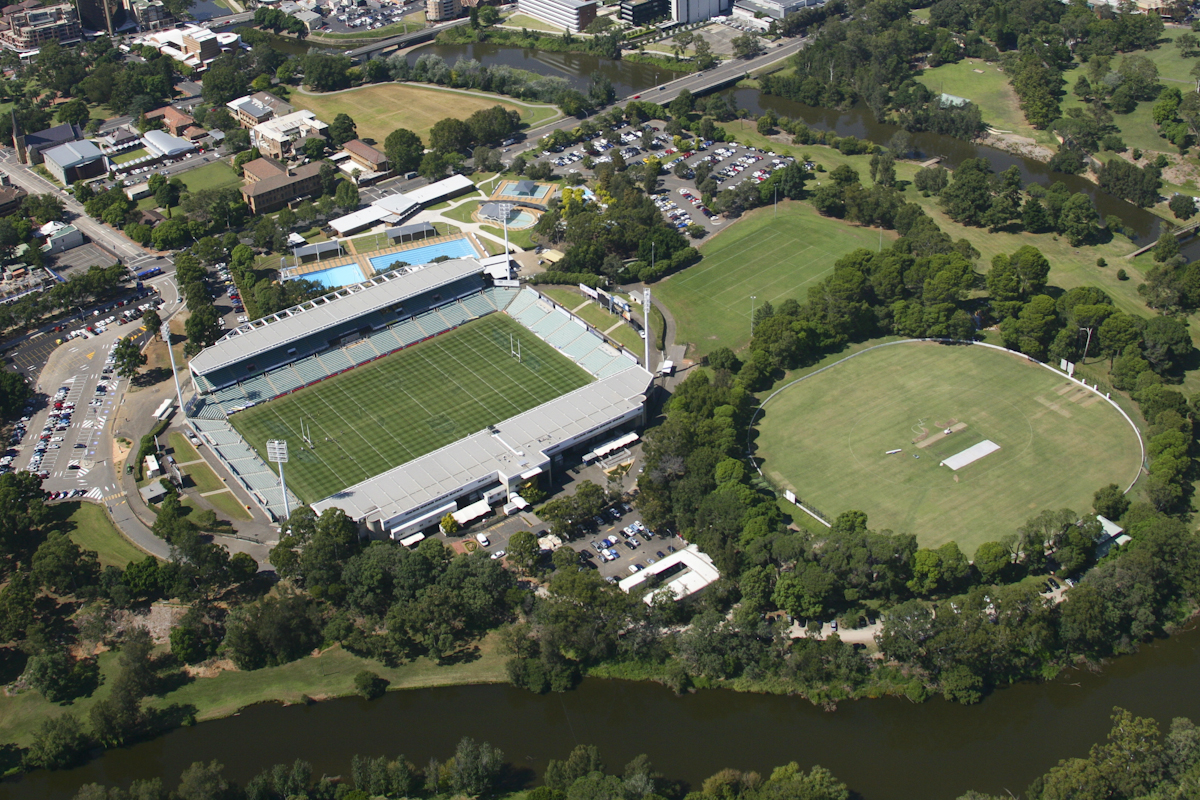 Parramatta Park has been in continuous use as a public park. It has been used for such diverse activities as boxing exhibitions, military parades, exhibitions, car racing, school and church picnics and at one time it even had a zoo. The park has been home to cricket, football, horse and motor racing, athletics, golf and bowls, and even its own swimming beach, known colloquially as 'Little Coogee'.

Significant monuments in the park commemorating important events include the Soldiers Memorial to the Boer War (constructed 1904), and a memorial commemorating the cross-country flight of aviator William (Billy) Hart from Penrith to Parramatta Park in 1911.

Today Parramatta Park continues to provide cricket ovals, a golf course, a swimming pool, playing fields, and open parklands for community use. The park is also the venue for major festivals, sporting and special events such [media]as Australia Day celebrations. The parklands contain rare and historic monuments, archaeological deposits and landscape elements from the earliest years of the colony. The park’s environment contains remnant and regenerated Cumberland Plain vegetation and is rich in fauna. This important colonial landscape contains two of the oldest buildings in Australia – the Dairy Cottage and Old Government House. 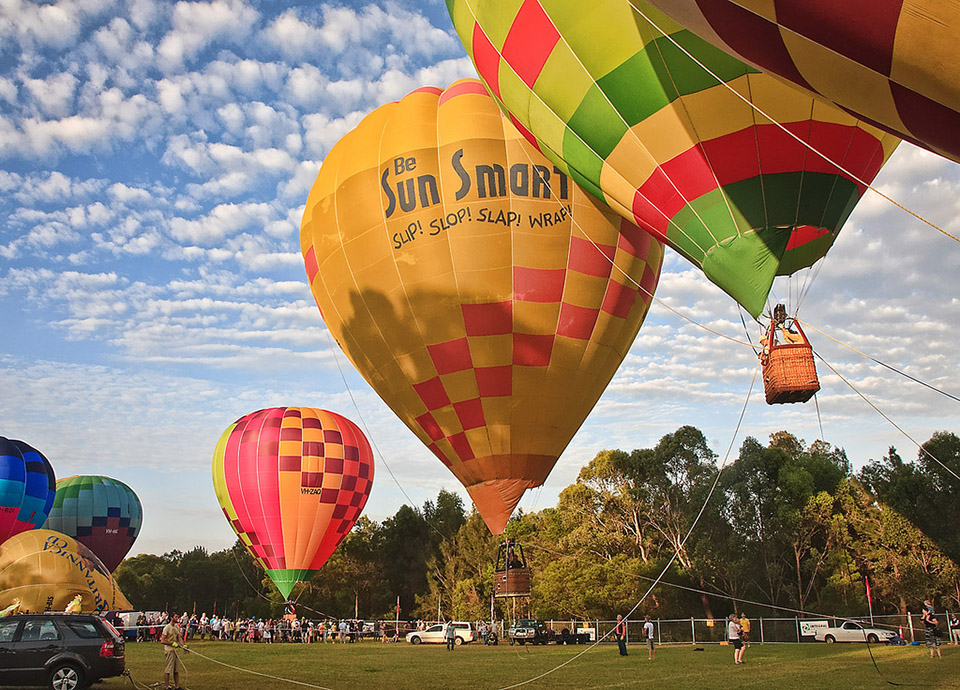 Parramatta Park [media]is a site for major research, education and interpretation programs which help reveal the landscape’s underlying structure and cultural values, the impact of Aboriginal and European activities, and the planning and development of the convict system in Australia and the origins of the town of Parramatta. 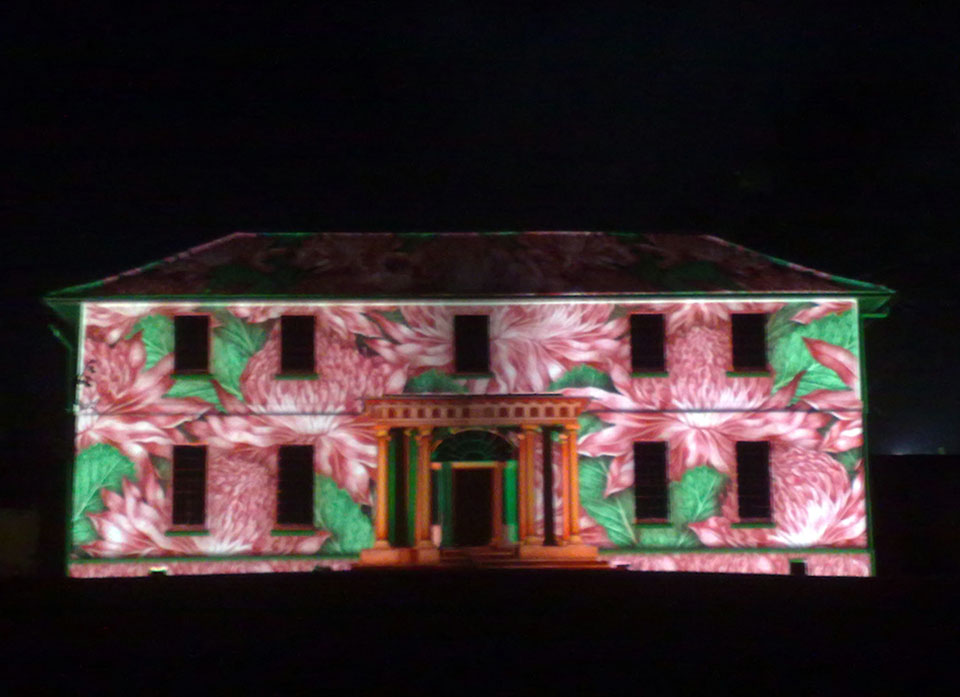 For 150 years Parramatta Park has been the major community space in western Sydney to celebrate and commemorate our cultural diversity through conservation, events, recreation, leisure and sport.

J Jervis, The cradle city of Australia: A history of Parramatta 1788–1961, The Council of the City of Parramatta, John Sands, Sydney 1963

Sue Rosen, Government House Parramatta 1788–2000, A History of the Governors, Their Home And Its Domain Parramatta Park, Caroline Simpson, Sydney, 2003